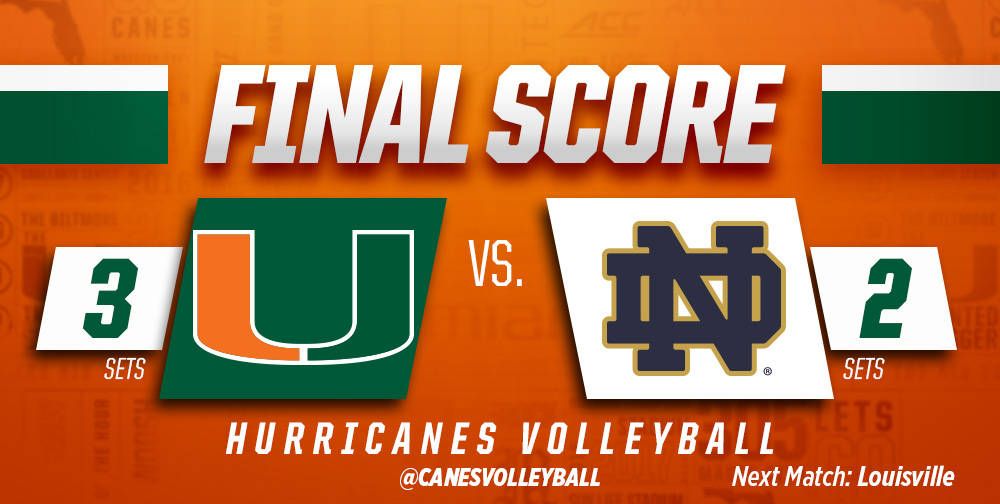 The Hurricanes (10-13, 4-7 ACC) gave the Fighting Irish (18-5, 9-2 ACC) their second conference loss of the year. The victory is Miami’s second during its current three-match road trip.

“Notre Dame is just that kind of team that doesn’t make a lot of errors, they make you play and they’re well-coached,” Miami head coach Jose “Keno” Gandara said. “It was a good challenge for us at this point. We are learning how to not beat ourselves. Over time, we did enough tonight. In the fifth game we played some of our best, serving-wise. They’re a different team than last time, dealing with some injuries, but you never apologize for a victory. I think we showed some of the improvement we have been making lately.”

The Canes got off to a hot start in the first set, taking an 8-4 lead that forced Notre Dame to call a timeout. But the Irish would fight back to take a 12-11 advantage before Miami called timeout to slow their run. The Hurricanes would rebound and regain the lead at 17-16 and extended their lead to 21-19 before Notre Dame called its final timeout of the set. Miami closed out the opening set victory, 25-22, after hitting an efficient .310 in the set.

The second set was another tight competition, with the teams battling to a 10-9 Notre Dame lead before Miami called timeout. The Irish called timeout up 16-15 to slow a charging Hurricanes team, but Miami would take the lead at 22-21 and force Notre Dame’s second timeout. The Hurricanes took the second set, 25-22, and entered the locker room up two sets to none at the intermission.

Notre Dame opened the third set up 4-0, before Gandara called timeout to get the Canes back on track. Miami would get within one, 6-5, and again at, 7-6, 9-8 and 10-9, but the Irish would extend their lead to 13-9 and force another Miami timeout. Notre Dame went on to take a 19-12 lead, but Miami would charge back to cut the lead to four, 20-16, and force an Irish timeout. Miami continued its run, taking three of the next four points before Notre Dame called its final timeout of the set up 21-19. Notre Dame regrouped to close out the third set with a win, 25-21, to extend the match.

The Hurricanes and Fighting Irish would continue their back and forth tilt in the fourth set, with Notre Dame taking a 10-6 lead before Miami called timeout. The Canes won seven of the next 11 points to get within one, 14-13, and force a Notre Dame timeout. The teams would trade points and reach a stalemate at 20 before Notre Dame took a 22-20 lead and forced a Miami timeout. The Canes made a late push, but fall short, 25-22, and head to a decisive fifth set.

The Canes jumped to a 3-0 lead in the fifth set when Notre Dame called timeout to try and slow the Miami momentum. The Irish would make a run to get within three, 9-6, but Miami pushed back to take an 11-7 lead before another Notre Dame timeout. The Canes would call timeout up 13-10 and closed out the match with a 15-11 win in the fifth set.

Olga Strantzali, Hannah Sorensen and Anna Haak played key roles in Miami’s victory on Friday, as each player turned in a career-best performance.

“Hannah has been working hard in practice and you can’t substitute that,” Gandara said. “She’s finally getting a return on it and all the time she has put in with [assistant coach] Kasey [Crider], who has done a good job working with her.

“Olga, what can you say about her,” Gandara said. “She’s playing with one hand and she was able to deal with tough conditions out there going up against good blockers and manage that. We are proud of her and think she can continue to do that.”

Strantzali finished with a career-high 28 kills, adding 17 digs and an assists to record her seventh double-double of the year. Her 28 kills rank fourth-best in program history for a single match.

“We have been playing better lately,” Strantzali said. “I feel like today was a big win for us. I feel like I did my job tonight and everyone did their job. We had so much fun today and that was a big key for us.”

Sorensen turned in a career-high 64 assists that are tied for second-most in a single match in Hurricanes history. The freshman setter added 11 digs, a career-high three service aces and a block to finish the night with her fourth double-double of the season.

“It’s exciting to get the win, especially because they beat us at home earlier this season,” Sorensen said. “Our hitters did a really good job of finding the court and hitting the shots they’ve been working on the last few weeks.”

Haak’s career-high 19 kills were second-most for the Canes on Friday night. The sophomore added 12 digs and three blocks to record her fifth double-double of the 2016 campaign.

Kolby Bird also recorded double-digit kills, tallying 13 while hitting a team-leading .385 for the match. The sophomore also had four digs and two blocks against the Irish.

Sylvia Hernandez had a service ace and a career-high 31 digs to lead all Hurricanes in that category. Sara Duque had 10 digs, while Carly Davey and Codi Lee also saw action in reserve.

Miami will close the weekend at Louisville Sunday with a 2 p.m., match against the Cardinals that will be broadcast on ACC Network Extra.

Following this weekend’s matches, the Hurricanes return home for a pair of matches during Homecoming Week. Miami will host North Carolina at 7 p.m., on Nov. 4 and welcomes NC State for a 1 p.m., match on Nov. 6.