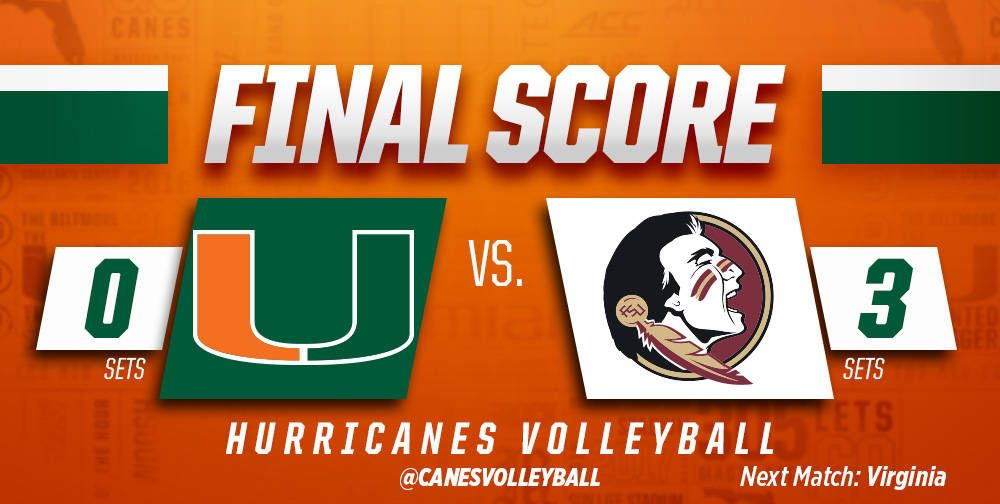 @CanesVB Falls to No. 12 Florida State

The Hurricanes (8-13, 2-7 ACC) came up short against the No. 12 Seminoles (15-3, 8-1 ACC) in their second meeting of the year. Miami head coach Jose “Keno” Gandara believes the Canes put themselves in a hole early and that proved to be the difference.

“I thought we made too many errors in Games 1 and 2, so it was an uphill battle from there on,” Gandara said. “I think we settled a little bit and cut back in errors a lot. We got opportunities. They made some errors and we got to play a little bit more and that was the key. I thought we served and set a little tougher in Game 3.”

The Canes and Noles battled early in the opening set, with Florida State calling timeout up, 8-4. The break would prove effective for the Seminoles as they doubled their lead to eight, 16-8, and forced Miami to call timeout to regroup. Florida State would take nine of the next 14 points to close out their 25-12 win in the first set.

Miami started fast in the second set, taking a 4-2 lead, but the Seminoles battled back with a 6-0 run to take an 8-4 lead and force a Hurricanes’ timeout. The move would prove wise, as Miami would take the next three points before Florida State followed with four consecutive points that led to Miami’s second timeout of the set. With Miami out of timeouts, the Hurricanes could not stop play to regroup and the Seminoles would pull away to take the set, 25-15, and enter the intermission up two sets to none.

The Seminoles jumped to a 12-5 lead in the third set before Miami made a big push, taking eight of the next 11 points to be down just two, 15-13, at the media timeout. The two rivals continued to battle with Florida State taking a 21-17 lead before Miami called timeout. The Seminoles would reach match point at 24-20, but Miami would take the next two points to force a Florida State timeout at 24-22. The Noles would close out the three-set win with a 25-22 victory in the final set.

Lucia Pampana had five kills and tied with Bird for the team lead with four blocks, while Sakile Simmons added a kill and a block.

Miami will travel to face Virginia at 7 p.m., on Saturday in Charlottesville, Va. Following this week’s matches, the Canes will continue their road swing with a trip to Notre Dame for a 7 p.m. match on Oct. 28. Miami will also play at Louisville at 2 p.m., on Oct. 30.