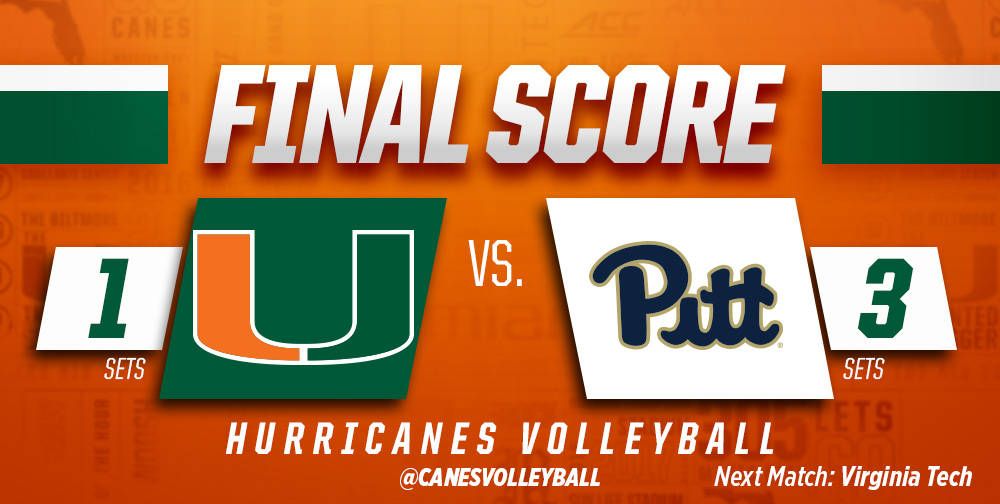 @CanesVB Battle Pitt at The Knight

CORAL GABLES, Fla. – The University of Miami volleyball team opened a three-match homestand at the James L. Knight Sports Complex with a four-set battle against Pittsburgh on Friday.

Miami would bounce back in the second set, earning a 25-22 victory to head into the intermission tied at one set apiece. The Canes were led by Olga Strantzali’s five kills, while Lucia Pampana and Hannah Sorensen each had service aces in the set.

The third set was another tight one, with Pitt edging out a 25-22 victory to take a two sets to one lead in the match. The Panthers closed out their four-set win with a 25-18 score in the final set of the evening.

“I definitely see improvement and we’re playing a lot better,” Miami head coach Jose “Keno” Gandara said. “Unfortunately, it was not good enough to win, but we definitely have improved. The numbers show it, the behavior out there, the rhythm of the play. We just have to do it more often.”

A trio of Hurricanes notched double-digit kills against Pitt, led by Strantzali’s 14. The junior added seven digs and a block, while Anna Haak closed the night with 12 kills, eight digs, three blocks and two assists.

“I feel like we’re getting better, as the coaches said today,” Strantzali said. “In some sets we started off really poorly. We have to start a little better, but I feel like in the last two or three games we have gotten better.”

Kolby Bird rounded out the double-digit kill group, finishing the match with 11 kills on a .450 attack percentage and adding two blocks, two assists and a dig.

“The past two weeks I’ve been working on hitting a different type of shot, which was down the line,” Bird said. “I’ve been working on that all practice, so this was really the first game I could put that into play. I think I did a really good job and it paid off.”

Lucia Pampana had four kills and four blocks, while adding a pair of service aces. Fellow middle blocked Sakile Simmons tallied five kills and a team-best six blocks while hitting .364 for the match.

Sorensen dished out 40 assists, tying her career high with four blocks and her career best with two service aces. The freshman setter also recorded a career-high two kills and had three digs.

The Hurricanes will face Virginia Tech at 1 p.m., on Sunday. Following this weekend’s action, the Canes will wrap up a three-match homestand with a Wednesday night match against Florida State at 7 p.m., on Oct. 19. Miami will then travel to face Virginia at 7 p.m. on Oct. 22.