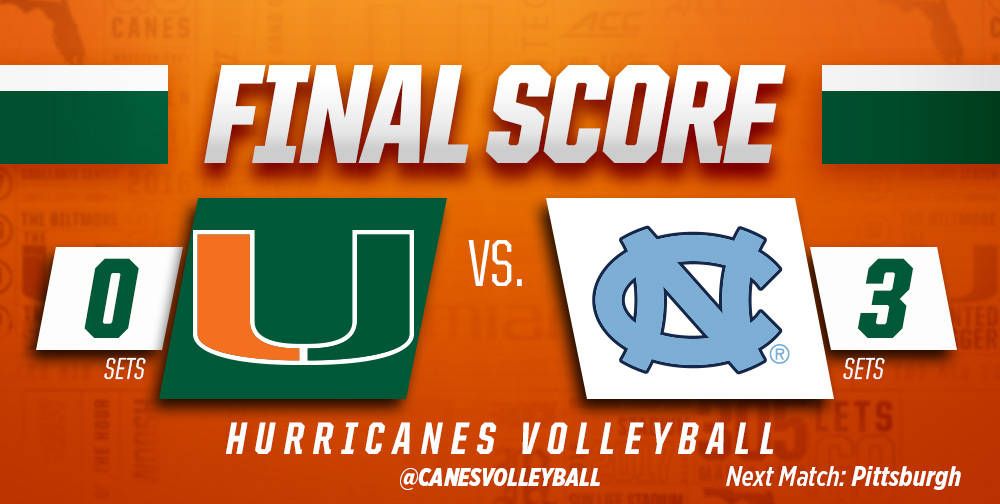 @CanesVB Drops Match at No. 9 UNC

The Hurricanes (7-11, 1-5 ACC) battles the Tar Heels (15-2, 6-0 ACC) at Carmichael Arena, but North Carolina defended its home court. The opening set was a tight one, with North Carolina winning, 25-20. But the Tar Heels opened Set 2 with an 8-1 lead and never looked back, taking the set, 25-10, and heading into the intermission up two sets to none. North Carolina completed the sweep with a 25-18 win in the third set.

Olga Strantzali led all Hurricanes with 16 kills, adding three digs and a service ace. Fellow outside hitter Anna Haak had eight kills and a team-high 13 digs, as well as two assists and a block. Kolby Bird recorded two kills, a dig and a service ace.

Middle blocker Lucia Pampana tallied four kills and a dig, while Sakile Simmons had two kills and a block.

Hannah Sorensen dished out 27 assists and had six digs, while Sylvia Hernandez notched 12 digs and a service ace as Miami’s libero.

Defensive specialist Sara Duque had a dig and Carly Davey also appeared in reserve for the Hurricanes.