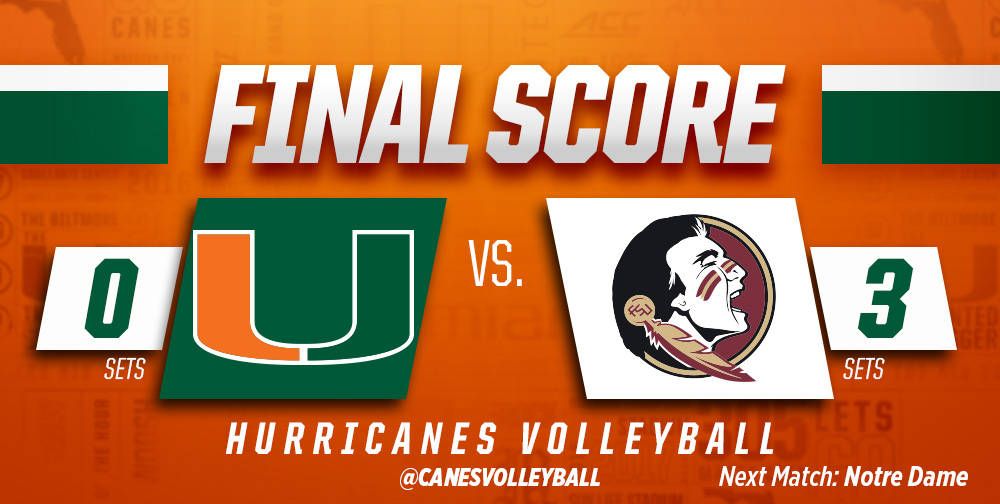 @CanesVB Falls at No. 15 Florida State

TALLAHASSEE, Fla.  – The University of Miami volleyball team dropped its ACC opener at No. 15 Florida State.

The two in-state rivals met in Tallahassee to open ACC play for the second consecutive season. Miami (6-7, 0-1 ACC) battled the host Seminoles, but could not defeat Florida State (8-2, 1-0 ACC) on its home floor on Friday night.

“It was a little bit of a perfect storm,” Miami head coach Jose “Keno” Gandara said. “They’re a good team and they did some things really well and we were unable to get in a good offensive rhythm and that always puts pressure on our defense. It was a lopsided match the whole way through. They were tough and I’m not sure if we were tough enough.”

The Hurricanes and Seminoles played tight early in the opening set, with the Noles leading, 6-5, in what started out as a see-saw battle. But Florida State got on a hot streak, winning 10 consecutive points to take a 16-5 lead. The big gap would be too much for the Canes to overcome in the first set, as FSU took a 1-0 lead in the match with a 25-12 win.

“We just try to focus on our statistics and what we know,” Gandara said. “We don’t control them and they were doing some things well. We just focused on the things we could have done better. That was the message [after Set 1].”

The Seminoles jumped out to a 9-4 lead in the second set, but Miami was resilient. The Canes charged back to within two, 13-11, forcing the Noles to call timeout to try and slow Miami’s momentum. The decision would prove to be a wise one, as Florida State would build a 20-14 lead. The Seminoles would take the second set, 25-15, and head into the intermission up two sets to none on Miami.

Miami opened the third set on a roll, bursting out to a 5-1 lead that included two service aces from Olga Strantzali. Florida State would call timeout to try and regroup, but Strantzali ripped an ace out of the break to keep momentum on Miami’s side. Florida State would claw back to even the third set at 14. The teams then traded points until FSU took a 19-17 lead and Miami called timeout. The Seminoles would pull away to take the third set, 25-19, and the match.

“I think that as a team we need to learn to let go of mistakes,” Miami junior Sakile Simmons said. “When I say that, I don’t mean not caring and letting more points happen. It’s more about knowing what you did wrong and fixing it. We can’t wait because teams aren’t going to wait for us.”

Lucia Pampana had four kills, two digs and a service ace, while Simmons recorded three kills and a block. Kolby Bird had two kills, a block and a dig from the right side.

“This was a learning lesson,” Simmons said. “We weren’t good enough to win today. We know what we need to fix and where we need to go from here.”

The Canes will host Notre Dame at 11:30 a.m., on Sunday in their ACC home opener. Following this weekend’s matches, Miami will host Boston College and Syracuse during the second week of ACC play. Boston College will face Miami at the Knight Sports Complex at 7 p.m. ET on Sept. 30, while Syracuse plays the Canes at 1 p.m. ET on Oct. 2.