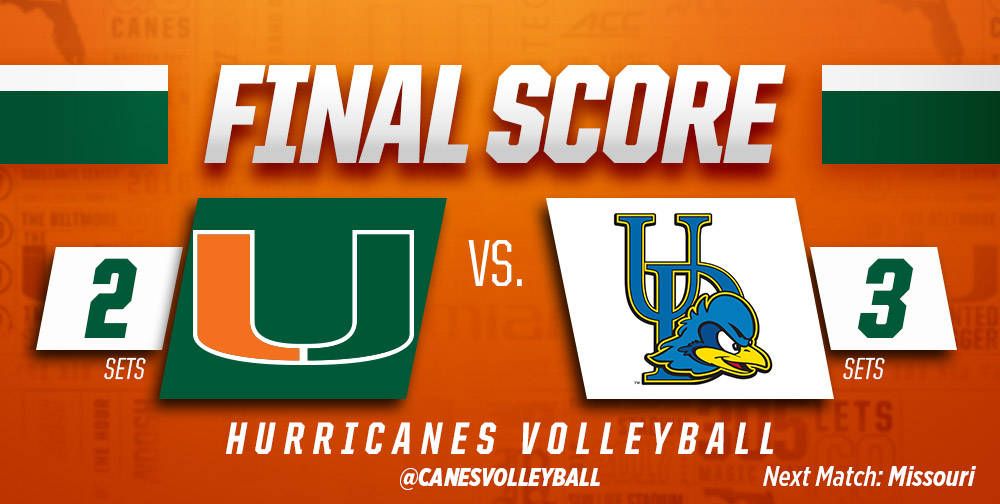 NEWARK, Del.  – The University of Miami volleyball team fell short in a five-set battle to the host Blue Hens at the Delaware Invitational.

The Hurricanes (5-5) were resilient against Delaware (5-5), but ultimately dropped their opening match to the Blue Hens on their home floor.

Delaware took a 2-0 lead into the intermission, winning each of the first two sets by a score of 25-22. But Miami came out of the locker room with a renewed focus and evened the match, taking the third set 25-18 and forcing a decisive fifth set with a 25-23 victory in the fourth set. The momentum would shift a few times during the final set, but Delaware clinched the match with a 15-11 win.

Kolby Bird had eight kills, 12 digs, two blocks and an assist, while Lucia Pampana was Miami’s most efficient hitting, tallying seven kills on a .333 attack percentage to go along with a team-high six blocks, three digs, two service aces and an assist.

Hannah Sorensen made her Miami debut as the Hurricanes’ setter, dishing out a career-high 39 assists to go with 13 digs and a block.

Sylvia Hernandez had 12 digs and two assists as Miami’s libero, while Codi Lee and Alyssa Basdavanos also appeared in reserve for Miami. Lee had one dig, while Basdavanos recorded two assists and a dig.

The Hurricanes are back in action against Missouri at 10 a.m. ET on Saturday and close out the tournament with a 4:30 p.m. ET match against Duquesne.

Following this weekend’s matches in Delaware, the Hurricanes will open conference play with matches against ACC foes Florida State and Notre Dame. Miami will travel to Florida State for its ACC opener at 7 p.m. on Sept. 23, while the Canes will host Notre Dame at 11:30 a.m. on Sept. 25 in their ACC home opener.