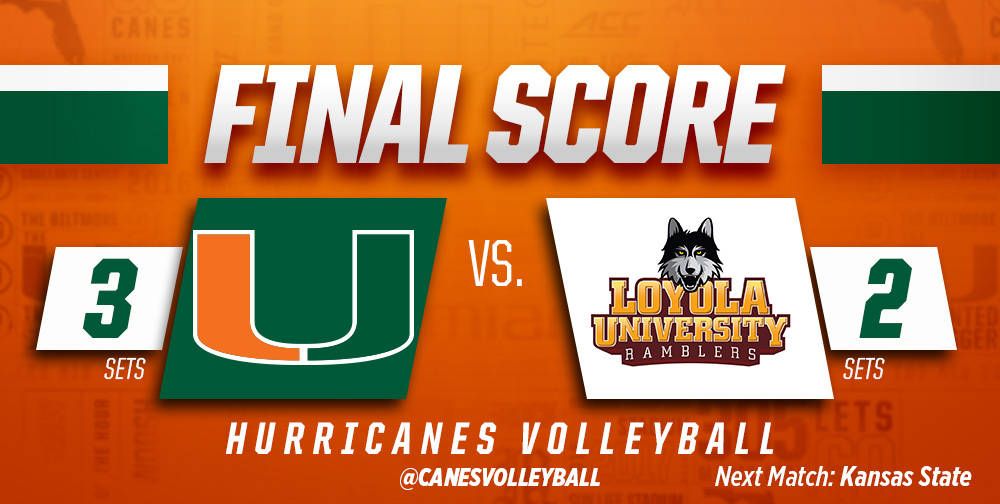 MANHATTAN, Kan.  – The University of Miami volleyball teamdefeated Loyola Chicago in its opening match at the Wildcat Classic.

The Hurricanes (4-3) dropped the Ramblers (3-4) in a five-set battle at Ahearn Field House on the campus of Kansas State University. Loyola Chicago took the first two sets, 25-22 and 25-20, to head into the intermission with a 2-0 lead in the match.

But the Hurricanes emerged from the locker room recharged, winning the third set, 25-23, to extend the match. Sophomore Kolby Bird played a key role in Miami’s third set victory, recording seven kills and two blocks in the set.

The Canes took the fourth set, 25-23, to force a decisive fifth set. Miami would hit .438 en route to a 15-12 win in the final set that closed out the match victory for the Hurricanes.

Three Canes registered double-digit kills against Loyola Chicago, led by Olga Strantzali’s 19. The junior added a team-high 15 digs to record her second double-double of the year and had two blocks against the Ramblers.

Bird, who was fantastic in the third set for Miami, finished with 15 kills, six blocks and three digs. Anna Haak had her first double-double of the season with 11 kills and 11 digs, as well as six blocks and two assists.

Alyssa Basdavanos had her first double-double, distributing 46 assists and recording 10 digs. The junior setter also had a block and two kills, while libero Sylvia Hernandez recorded 14 digs and an assist.

The Hurricanes also got contributions from Sara Duque, Brooke McDermott and Madison Dill. Duque recorded seven digs, while Dill had three kills and five blocks. McDermott added a block and a dig in the victory.

Miami returns to the court Friday night to face the host Kansas State Wildcats (4-2) at 8:30 p.m. ET. The Canes will close out the weekend with a match against Mississippi State (5-2) at 11:30 a.m. ET on Saturday morning. The match between Miami and Kansas State is set to be broadcast live on FCS-Atlantic.

Following this weekend’s action, Miami is set to close non-conference play with three matches at a tournament at the University of Delaware on Sept. 16-17.