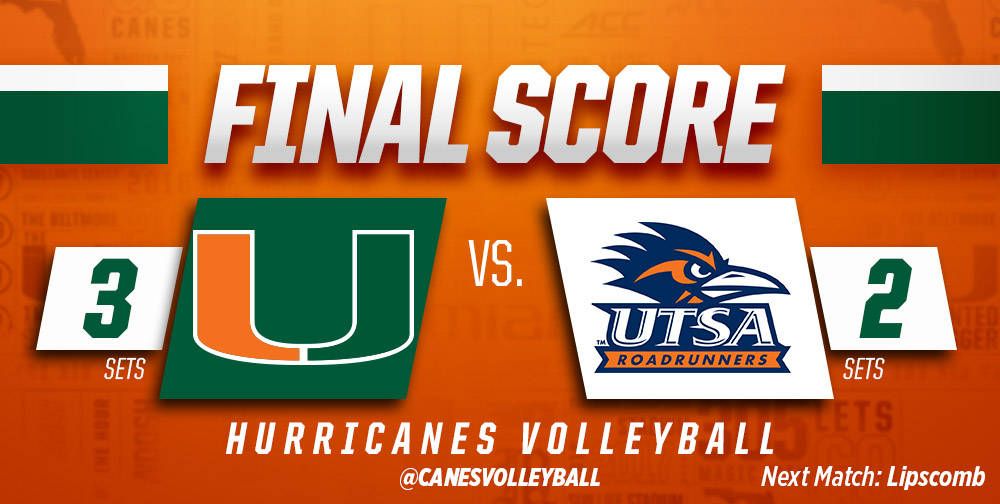 AUSTIN, Texas – The University of Miami volleyball team had an impressive comeback victory over UTSA to open its competition at the American Campus Classic.

The Hurricanes (3-1) rallied from being down 2-0 at the intermission to take the final three sets of the match and secure their third victory of the season.

While the Miami attack improved dramatically in the second set, hitting .484 against UTSA, the result was the same. The Roadrunners took the second set, 25-22, to enter the locker rooms at the intermission up comfortably, two sets to none.

But Miami regrouped at the break and charged out to a 25-20 win in the third set that breathed life into the Hurricanes. An exciting 26-24 win in the fourth set forced a decisive fifth set, one that Miami took 15-12 to earn its first come-from-behind victory of the 2016 season.

Sophomore Kolby Bird might have been Miami’s most dangerous hitter, as she registered 16 kills and a team-best .625 hitting percentage in five sets of action. Bird also had a pair of service aces to tie with Strantzali and Haak for the team lead in the match, while adding three digs and a block.

Middle blockers Sakile Simmons and Lucia Pampana also got in on the action, combining for 13 kills and six blocks. A Houston native, Simmons excelled in her first match back in her home state, recording seven kills and a team-leading four blocks. Pampana added six kills and two blocks against UTSA.

Alyssa Basdavanos made her Hurricanes debut against UTSA and the junior stepped up in a big way. Basdavanos dished out 53 assists, had five digs, a block and a service ace, while helping Miami hit .264 as a team.

Miami plays Lipscomb at 5:30 p.m. ET on Friday night and closes out the tournament on Saturday at 5 p.m. ET against the host Longhorns. All matches at the American Campus Classic will be broadcast on the Longhorn Network.