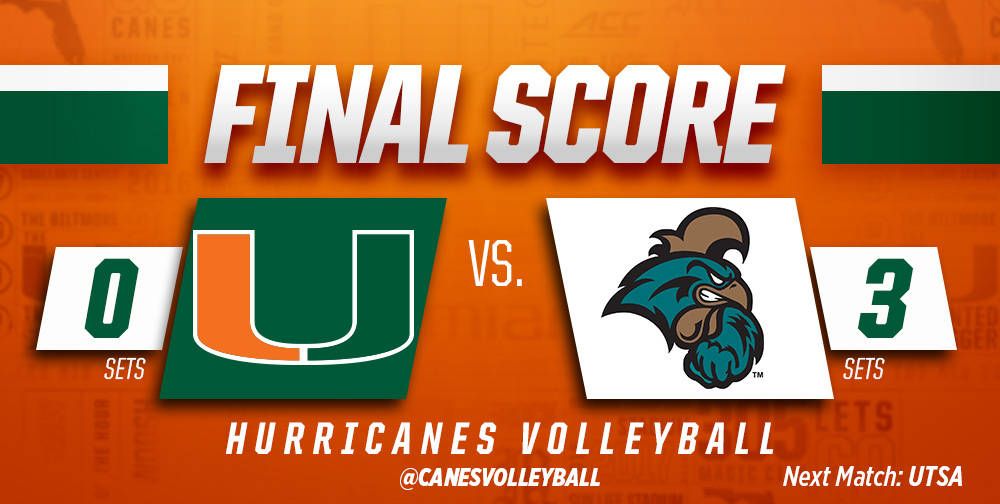 The Hurricanes (2-1) lost a home non-conference match for the first time since Sept. 13, 2013, when the Canes fell in a five-set thriller to LSU. Miami head coach Jose “Keno” Gandara believes Coastal Carolina (3-0) played a complete match Saturday and that proved to be the difference.

The opening set began with a back-and-forth battle, before Coastal Carolina scored five straight points to take a 10-4 lead and force Miami to call timeout. The Hurricanes battled back to cut the lead to four, 18-14, after three straight kills from Olga Strantzali that led Coastal Carolina to call timeout. But the Chanticleers would close the first set by scoring seven of the final nine points to win the set, 25-16.

“They played a lot better [than us] tonight,” Strantzali said. “We have to be better. We have to fix some things. We have to pass better. I feel like that was a good lesson for us because we know what we need to work on next week. Hopefully next week we’re going to play better.”

The second set was a tight one, with neither team leading by more than three points until Coastal Carolina took a 22-18 lead late in the set. The Chanticleers closed out the set, 25-21, to head into the intermission up two sets to none.

Coastal Carolina closed out the match with a decisive third set victory, 25-11. The Chanticleers’ offense hit .350 in the set, while three Coastal players combined for four aces to finish off the third set win.

Strantzali led all Hurricane hitters with a season-high 17 kills against Coastal Carolina. The Preseason All-ACC selection hit .343 for the match and had four digs.

“I thought Olga [Strantzali] was really good offensively, but we have to improve and move forward from this,” Gandara said. “I think the concepts we’re implementing are good. We weren’t able to run our offense off the passes that we had.”

“They’re a good team and we’re somewhat of a young team,” Gandara said. “We have some juniors, but we [also] have a lot of new girls on the court. It was probably our first good battle out and we weren’t ready for it. That’s a concern, [but] I think our girls will respond. I’m sure we will be in battles like that soon and we’ll play a lot better.”

Miami is back in action next weekend at the American Campus Classic, hosted at the University of Texas in Austin, Texas. The Hurricanes have three matches scheduled in Austin, beginning at 11 a.m. ET on Sept. 2 against UTSA. Miami plays Lipscomb at 5:30 p.m. ET on Sept. 2 and closes out the tournament at 5 p.m. ET against the host Longhorns. All three matches will be broadcast on the Longhorn Network.