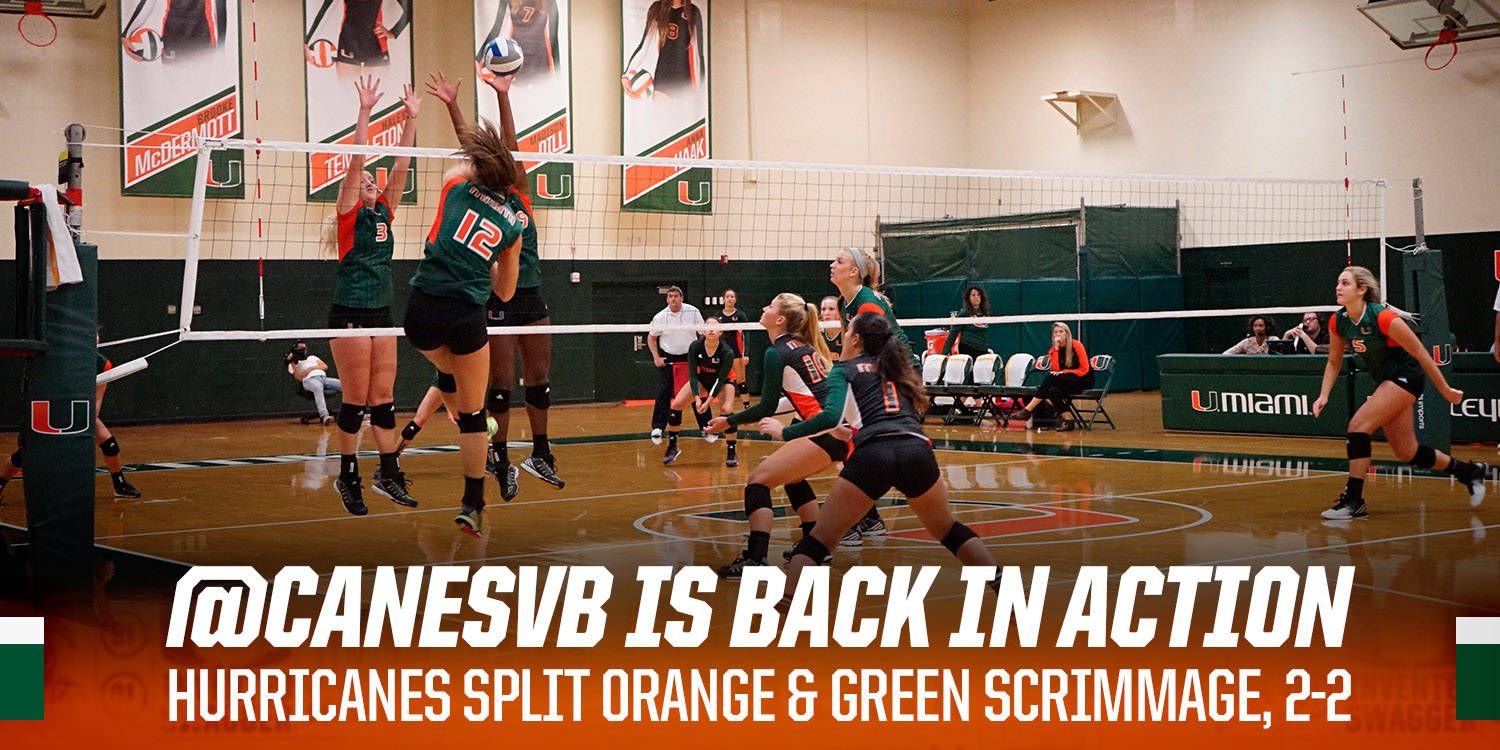 The Orange and Green teams split the annual preseason scrimmage two sets apiece, with 14 Hurricanes taking their home floor for the first time in 2016.

“It was great to get out there with the refs and fans and get comfortable with that, so it doesn’t affect the way we play,” Miami head coach Jose “Keno” Gandara said. “Clearly we did some good things, and there are some things that we need to work on, but it’s a good point to start before the season.”

Preseason All-ACC selection Olga Strantzali led the Green team to a 25-21 victory in the opening set. The junior tallied nine kills in the first set, while the Green squad combined to hit .306 with 15 kills in their win.

Green took a two sets to none lead in the scrimmage after winning the second set, 25-22. Sophomore Anna Haak led the way, recording 12 kills against her Orange counterparts in the set. Freshman Hannah Sorensen dished out 12 assists in the set, bringing her match tally to 24 through two sets.

“It was super exciting,” Sorensen said. “The hitters worked so hard to make it really fun and really easy to run the offense because they’re all doing their jobs and the middles are pulling blocks and the passers are getting the ball where it needs to be, so it just makes it easy and fun. It was exciting setting such good hitters.”

The Orange team earned it first victory in the third set, 25-23, with Haak and junior Sakile Simmons combining for 11 kills. Preseason All-ACC setter Haley Templeton recorded 10 assists and a pair of aces in the set, while freshman Carly Davey added an ace to help secure the set win.

“I’ve been excited about this group for a while, since the beginning of summer,” Simmons said. “It was just fun to see what we have so far and I’m excited to see what we’re going to grow into as a team.”

Haak and Simmons teamed up for 11 more kills in the fourth and final set, leading Orange to a 25-21 win to finish off the scrimmage with a spilt.

Miami brings back nine players from a 2015 squad that went 21-10, including 14-6 in the ACC. The Hurricanes finished 2015 with at least 20 wins for the second-consecutive season under Gandara. In addition, Miami also appeared in the 2015 NCAA Tournament, facing Iowa State in the opening round. The Canes have now reached the tournament in all three of Gandara’s seasons at the helm of the program and in each of the previous seven seasons.

Strantlzali, Simmons, Templeton and sophomore Lucia Pampana are four returning starters from 2015, while juniors Sylvia Hernandez and Brooke McDermott, as well as sophomores Haak, Kolby Bird and Codi Lee, will look to carve out bigger roles this season after contributing for the Canes last season

“I think they did pretty well,” Simmons said of the newcomers. “As a whole, we all have a ways to go, me included, but I think they had fun. I think they’re eager to learn and get better, so that’s the good thing.”

Miami will open the 2016 season with the UM/FIU Invitational on Aug. 26-27, the first of four non-conference tournaments on the 2016 Canes schedule. The Hurricanes will host Florida A&M in the season opener at 6 p.m., on Aug. 26. The Canes will play at FIU at 11:30 a.m., on Aug. 27 before returning to their home floor for a match against Coastal Carolina that is scheduled to begin at 7 p.m. Both home matches will be broadcast on ACC Network Extra.