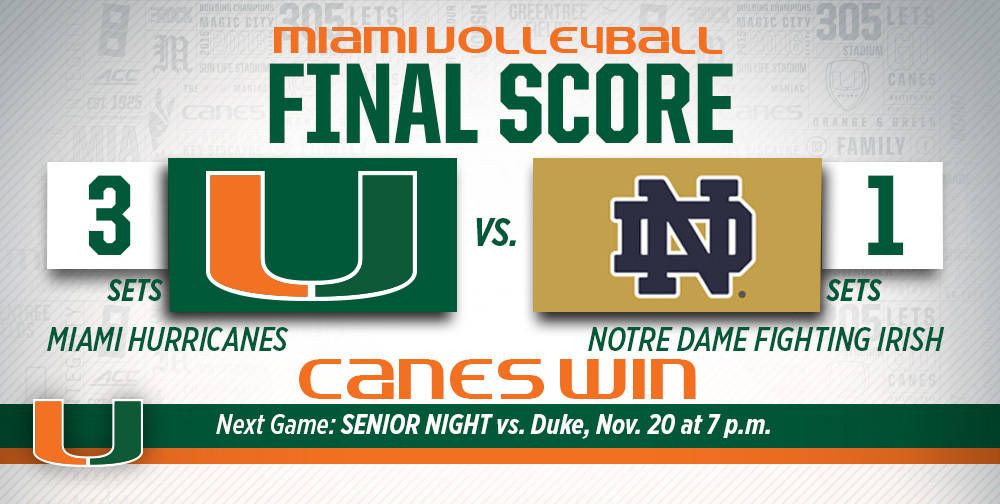 @CanesVB Beats Irish to Move to 11-1 at Home

CORAL GABLES, Fla. – The University of Miami volleyball team improved to 11-1 at home with a four-set victory over Notre Dame Sunday afternoon.

The Hurricanes (18-8, 11-4 ACC) jumped out to an early 5-0 lead in the opening set, forcing Notre Dame to call a timeout. Miami pushed to a nine-point lead, 14-5, and closed out a nine-point victory 25-16. Kelsie Groot, who had a team-high 18 kills on Friday against No. 22 Louisville, continued her success with a team-best five kills while hitting a blistering .833 in the opening set against the Fighting Irish.

“Notre Dame is a team that doesn’t make a lot of errors, so it puts the pressure on us to perform and execute,” Miami head coach Jose “Keno” Gandara said. “I thought, in Game 2, they served way better than we did. That was the key. When we matched them in serving, it created more opportunities for us. The lesson is that we can’t control what they do. We just have to do what we do better and better.”

Miami took a 2-1 lead in the match after a 25-18 victory in the third set. The Hurricanes got outstanding play from sophomore Olga Strantzali, who recorded a team-leading six kills while hitting a perfect 1.000 in the set.

“Her serving is phenomenal,” Gandara said of Strantzali. “It just creates a lot of easy defensive situations for us and she’s gotten more efficient with her attacking. She’s smarter. She knows when to go for it and when not. We’re setting her in better situations and she’s taking advantage of that.”

The Canes closed out the four-set victory with a 25-18 win in the fourth set. Taylor Scott led the Canes with five kills in the final set, while Haley Templeton dished out 13 assists and added a service ace to help the Hurricanes clinch their 11th home victory of the season.

Miami had three players finish with double-digit kills against Notre Dame. Templeton kept Miami’s offense in system and running efficiently. The sophomore setter dished out 51 assists while Miami hit .336 as a team. Templeton added four kills, seven digs, two blocks and an ace in the victory.

“We had a game plan that we followed strictly, listened to what the coaches said and everyone did their job,” Templeton said. “All of our hitters stepped up today. Distribution comes from the pass and our passing was good today.”

Strantzali was one of two Canes to pick up a team-high 14 kills against the Fighting Irish, hitting a stellar .545 for the match.  The sophomore added two service aces, tying for the team-lead, while adding six digs and three blocks.

“I think we played well on Friday, but Louisville is a good team—they’re the number one team in the conference,” Strantzali said. “I think we played well [on Friday] and better today. We want to go to the [NCAA] Tournament, so we have to win the rest of our games. We have to go hard every single day and that started with today’s match.”

“Everyone matches up differently,” Mourning said. “I think it was a good matchup for me. They only had one blocker, so I got a lot of opportunities to get kills.”

Anna Haak and Caitilin Donahoe were also contributors in reserve. Haak chipped in with two kills, while Donahoe had two digs against Notre Dame.

“Our goals haven’t changed,” Gandara said. “We just have to continue to get better day-to-day. I like the progress we’re making. As a coach, you always want a little bit more. We have two more weeks to make more progress and see where we end up.”

Following this weekend’s action, Duke and Wake Forest will travel to Miami for the final two home matches of the 2015 Hurricanes volleyball season.

The Canes will host Duke at 7 p.m. on Nov. 20, with a pre-match ceremony honoring seniors Caitilin Donahoe, Alexis Mourning, Taylor Scott and Kalysta White. The Hurricanes will host Wake Forest at 1 p.m. on Nov. 22 in the final home match of the season. All Miami home matches are played at the James L. Knight Sports Complex on the University of Miami campus and admission is free.