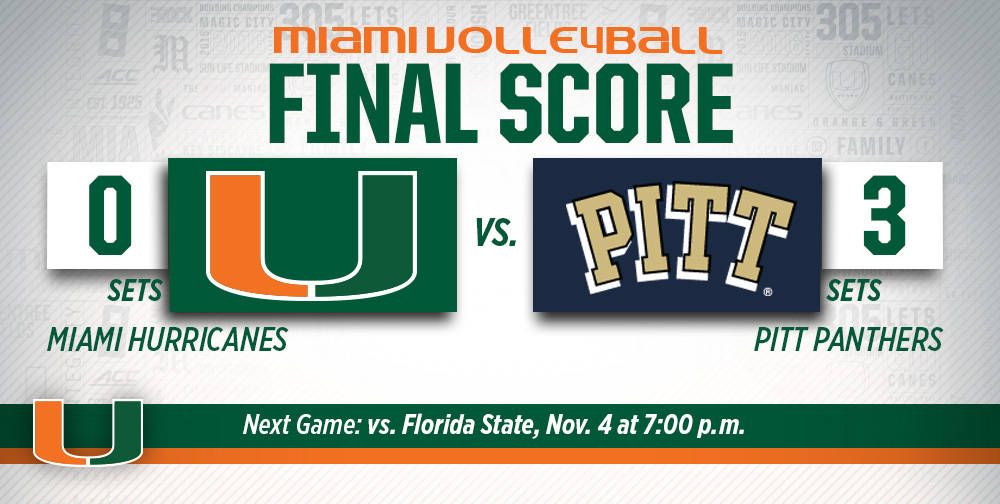 @CanesVB Falls in Three at Pitt

PITTSBURGH, Pa. – The University of Miami volleyball team dropped its final match of the weekend, falling at Pitt in three sets.

The Hurricanes (15-7, 8-4 ACC) dropped a tight opening set to the host Panthers, 25-23. Pitt took the second set, 25-20, to enter the intermission up two sets to none. The Canes battled, but came up short in the third set. The Panthers won the third set, 25-22, to complete a three-set sweep on their home floor.

Senior Alexis Mourning and junior Kelsie Groot tied for the team lead with seven kills apiece at Pitt. Mourning led the Hurricanes with a .500 hitting percentage and a team-high five blocks, while Groot added five digs and two blocks.

Sophomores Olga Strantzali and Sakile Simmons each recorded five kills for Miami. Strantzali added seven digs and a block, while Simmons hits .444 and had four blocks from her middle blocker position.

The Canes return to Coral Gables for a six-match homestand beginning next week against Florida State and Virginia. Miami will host the rival Seminoles at 7 p.m. on Wednesday, Nov. 4, and the visiting Cavaliers on Friday, Nov. 6, at 7 p.m. Louisville, Notre Dame, Duke and Wake Forest will also travel to Miami during the six-match homestand that runs through Nov. 22. All Miami home matches are played at the James L. Knight Sports Complex on the University of Miami campus and admission is free.