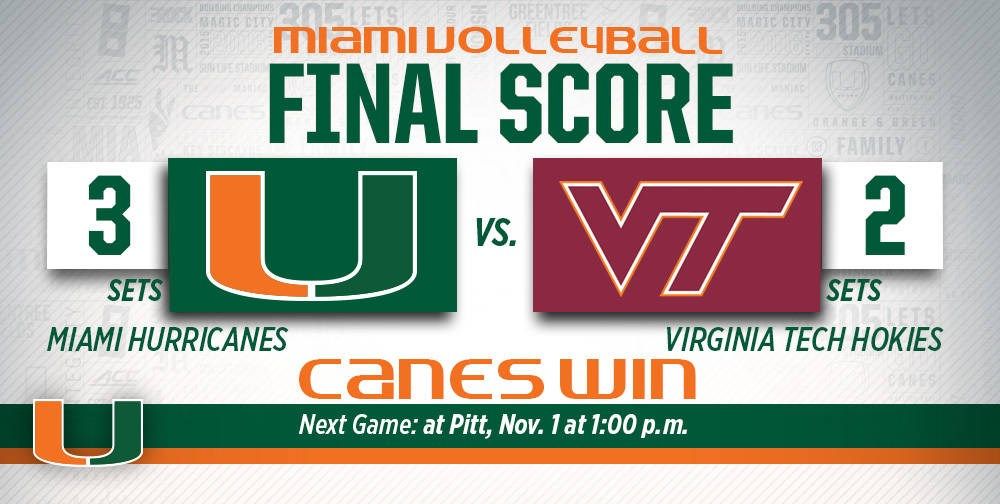 BLACKSBURG, Va. – The University of Miami volleyball team prevailed in a five-set battle on the road at Virginia Tech on Friday night.

The Hurricanes (15-6, 8-3 ACC) took the opening set, 25-22, thanks to a balanced attack that saw six Canes record kills against the Hokies. But Virginia Tech evened the match at one set apiece with a 25-19 victory in the second set.

The Hokies took a 2-1 lead in the match with a 25-16 victory in the third set, but a resilient Miami team took the fourth set 25-17 to force a decisive fifth set against Virginia Tech. The Hurricanes closed out the five-set victory with a 15-13 win in the fifth set that gave Miami its eighth win over its previous nine matches.

Kelsie Groot was a major contributor for the Hurricanes on Friday night, tallying 13 kills and 15 digs to record her seventh double-double of the season. The junior also led the Canes with a .414 attack percentage and added three blocks against the Hokies.

Senior Taylor Scott led all Canes with 18 kills. The senior also had four digs, a block and an ace, while sophomore Olga Strantzali added six kills and 10 digs against Virginia Tech.

Miami also got a boost from several reserves as Anna Haak, Kolby Bird, Caitilin Donahoe and Codi Lee contributed off the bend in different ways. Bird recorded three kills and a block, while Haak added a kill and a block. Lee, along with sophomore defensive specialist Sylvia Hernandez, combined for five digs.

The Canes will open the month of November with a 1 p.m. match at Pitt on Sunday. Following this weekend’s road trip, the Canes will return to Coral Gables for a six-match homestand beginning next week against Florida State and Virginia.

Miami will host the rival Seminoles at 7 p.m. on Wednesday, Nov. 4, and the visiting Cavaliers on Friday, Nov. 6, at 7 p.m. Louisville, Notre Dame, Duke and Wake Forest will also travel to Miami during the six-match homestand that runs through Nov. 22. All Miami home matches are played at the James L. Knight Sports Complex on the University of Miami campus and admission is free.