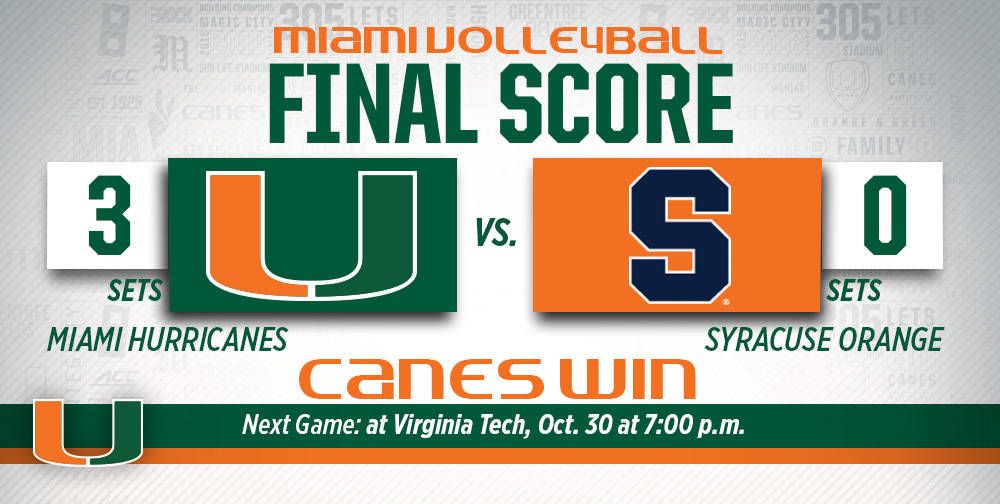 CORAL GABLES, Fla. – The University of Miami volleyball team closed out an unblemished weekend with a 3-0 sweep over Syracuse.

The Hurricanes (14-6, 6-3 ACC) took the opening set, 25-17, thanks to a strong performance by senior Taylor Scott. The talented outside hitter registered seven kills and hit .778 against the Orange. Olga Starntzali and Alexis Mourning were also effective, recording three kills apiece and hitting .429 and .500, respectively. The Canes also had four aces in the opening set, led by Haley Templeton’s two.

“I think it’s part of who we are and we have to continue to develop players,” Miami head coach Jose “Keno” Gandara said. “They have to have a job to do to help us do what we want to do. We’ll know day to day, night after night who those players are, but they’re ready to go and it’s part of our system.”

Miami and Syracuse battled back and forth in an exciting second set, but the Canes earned a 26-24 win thanks to another efficient set by Scott. The senior led all Canes with six kills and hit .417, while adding a service ace.

“In the middle of the second set, it was a little rough,” Scott said. “The thing is when you go into the game you can’t let the score really affect your play. You have to trust everything you do, everything you train. I came in pretty confident and calm and I knew that we were going to win that set.”

The Canes closed out the match with a 25-17 victory in the third set that secured their second straight win and the fifth in their last six matches. Scott closed out her stellar afternoon with six kills, while hitting .667 in the match-clinching third set win.

“I think that Syracuse is a good team and our girls understood that,” Gandara said. “They understood the challenges. They know that we are playing okay. We still can get better. I definitely liked the focus. They were ready to play.”

Scott finished the match with a team-high 19 kills and a team-best .600 hitting percentage. The senior added two digs and an ace, while powering Miami’s attack against Syracuse.

Strantzali had a solid showing Sunday, finishing with nine kills, five digs and an ace, while hitting .300. Kelsie Groot, Kolby Bird and Anna Haak also contributed for Miami at the outside hitter position, combining for four kills and eight digs.

“Kalysta had 17 digs each match this weekend,” Gandara said. “She’s really coming along with her job and doing it better. Sylvia is the other half of Taylor’s position. She’s doing a good job, stabilizing our passing with Kalysta. Olga had a good night and bounced back from Friday and Haley did a good job of keeping our offense in rhythm.”

Miami hits the road next weekend with a trip to Virginia Tech and Pittsburgh. The Canes will play the Hokies at 7 p.m. on Oct. 30 and are slated to open the month of November with a 1 p.m. match at Pitt on Nov. 1.