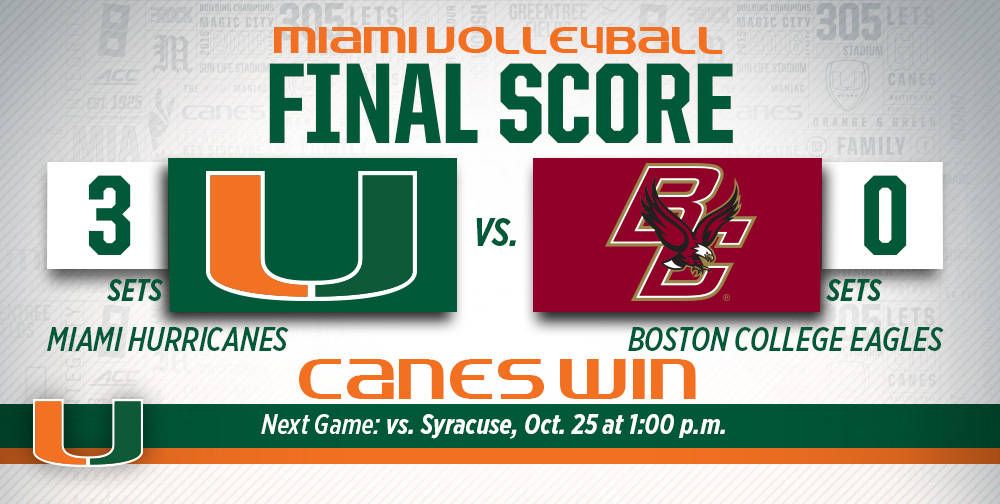 CORAL GABLES, Fla. – The University of Miami volleyball team opened the weekend with a three-set win over Boston College.

The Hurricanes (13-6, 6-3 ACC) took the opening set, 25-23, thanks in part to a strong offensive set by senior Taylor Scott and junior Kelsie Groot. Scott led the Canes with five kills and hit .364, while Groot added three kills while hitting .375.

“Taylor’s hard work is paying off,” Miami head coach Jose “Keno” Gandara said. “She has developed more range and she is making good decisions in the air. She really did a nice job offensively tonight and we need her to continue that.”

Miami took a 2-0 lead in the match with a 25-20 victory in the second set. Scott added five more kills, while Kolby Bird chipped in with three kills, three blocks and two service aces.

“It felt good coming in and being able to help us win the second set,” Bird said. “My teammates are really supportive when I am out there and that’s helped me build confidence when I get on the court.”

The Canes closed out their three-set win with a 25-19 victory in the final set. Freshman Anna Haak powered Miami’s attack in the third set, notching four kills while hitting .571 to help the Hurricanes close out the win.

“We’ve been training and last weekend at UNC we played a good team on the road and we didn’t play well,” Gandara said. “I think we responded tonight and we played well enough to win.”

Scott led all Hurricanes with 13 kills while hitting .290 for the match. The senior outside hitter added a block, three digs and a service ace against the Eagles.

“I was hitting the right shots,” Scott said.” We have worked a lot in practice to not force things if we are not in position. We are working to lower our errors and blocks and that’s something I focused on today.”

The Canes also saw several players contribute while playing outside hitter and opposite. Groot recorded five kills, a block and 15 digs, while Bird and Haak each contributed off the bench.  The freshmen combined for seven kills, four blocks and four digs. Olga Strantzali added two kills and two digs in one set of action.

“We have some depth and we have to develop it and find the right mix,” Gandara said. “We won’t stop doing that until we find it. We play different girls all the time in practice so they’re comfortable playing different positions and with different groups and that showed tonight.”

Middle blockers Alexis Mourning and Sakile Simmons were active on both offense and defense. Mourning had four kills, an ace and a team-high seven blocks, while Simmons added five kills and three blocks.

Sophomore setter Haley Templeton dished out 32 assists and added eight digs and four blocks, while senior libero Kalysta White led the Canes with 17 digs and a pair of service aces.

“I think Kalysta and Kelsie did a really nice job defensively,” Gandara said. “Taylor kept us afloat offensively for a while and Haley did a good job running our offense.”

The Hurricanes will close out the weekend when they host Syracuse Sunday at 1 p.m. Free ice cream will be served prior to Sunday’s match while supplies lasts. All Miami home matches are played at the James L. Knight Sports Complex on the University of Miami campus and admission is free.