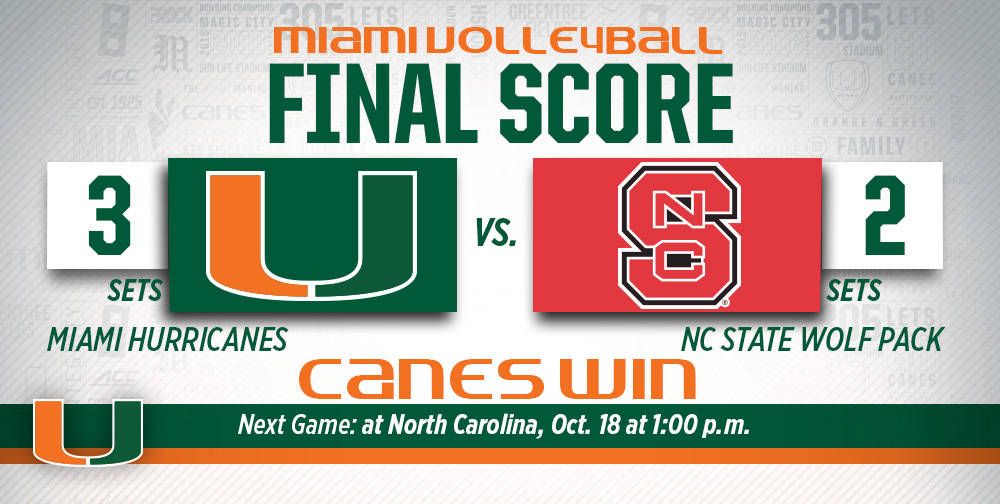 RALEIGH, N.C. – The University of Miami volleyball team grinded out a five-set road victory at NC State Friday night to open its second straight weekend away from home

The Hurricanes (12-5, 5-2 ACC) took the opening set 25-19, but the host Wolf Pack evened the match at one set apiece with a 25-18 victory in the second set. Following the intermission, NC State needed extra points to take a 2-1 lead in the match, but the Wolf Pack did just that by taking the third set 29-27.

Miami rallied to take the fourth set 25-23 and force a decisive fifth set and the Hurricanes clinched the hard fought victory with a 15-12 win the fifth set and extend the Canes’ current winning streak to five consecutive matches.

The Hurricane saw several players step up at different points of Friday night’s match, but junior Kelsie Groot proved to be a force on the attack in Raleigh. The veteran led Miami with a career-high 21 kills while hitting an impressive .340 for the match. Groot added 10 digs to pick up her sixth double-double of the season and added five blocks and two service aces against NC State.

Haley Templeton matched her career-high with 56 assists. The sophomore added nine digs while helping the Hurricanes hit. 282 as a team for the match.

Miami played a trio of middle blockers and they all contributed Friday night. Alexis Mourning, Lucia Pampana and Sakile Simmons combined for seven kills and eight blocks. Mourning led the group with three kills, while Pampana led all Canes with five total blocks.

The Canes will face North Carolina at 1 p.m. on Sunday to close out the weekend and their current-four-match road trip.

Following this weekend’s action, Miami returns to Coral Gables for a home match against Boston College at 7 p.m. on Oct. 23. That same weekend, the Hurricanes will host Syracuse on Oct. 25 at 1 p.m. All Miami home matches are played at the James L. Knight Sports Complex on the University of Miami campus and admission is free.