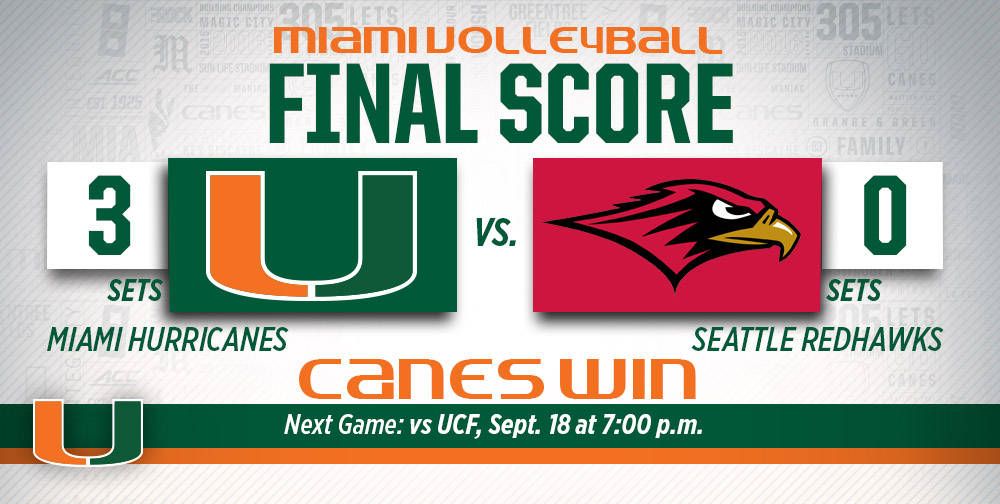 CORAL GABLES, Fla. – The University of Miami volleyball team opened the FIU/Miami Challenge with a three-set sweep over Seattle University.

The Canes (6-3, 0-0 ACC) beat the Redhawks 25-14, 25-20 and 25-21 to secure their third consecutive win and first of the two-day FIU/Miami Challenge. Miami head coach Jose “Keno” Gandara was pleased with how the Hurricanes opened their final weekend of nonconference play.

“I thought we served well and that was key in the match,” Gandara said. “They’re a big, physical team and we were able to keep them away from the net and simplify their offense a little bit. Our blocking was a little better on the right side and I thought our middles did a good job getting involved and being effective.”

The Canes took the opening set, 25-14, thanks to a balanced attack that hit .333 against Seattle. All of Miami’s hitters recorded at least two kills, with Kelsie Groot and Olga Strantzali tying with an opening set-leading three kills each.

Miami took a 2-0 lead into the intermission after winning the second set, 25-20. Senior Taylor Scott led the way for the Canes in the second set, smacking four kills and hitting .444 while adding a service ace.

The Hurricanes closed out the three-set sweep with a 25-21 victory that was powered by an efficient Miami attack that hit .394 for the set. Groot led the way with five kills in the set, but six different Hurricanes recorded a kill in the final set of the night.

Groot and Scott led the way for Miami with each player recording a team-high 10 kills against the Redhawks on Thursday night. Groot added five digs and three blocks, while Scott tallied seven digs and an ace against Seattle U.

“We can credit this win to working hard in practice every day,” Groot said. “All the things we worked on this whole week really showed tonight.”

Miami solid production from several others including outside hitter Olga Strantzali and middle blockers Alexis Mourning and Lucia Pampana. Strantzali had nine kills while hitting .368 and added seven digs and a team-high two service aces.

“We need everybody to be involved and effective and we have people on the bench who are ready to do that,” Gandara said. “It’s a good group. We have some depth, which at some point is going to be critical.”

Setter Haley Templeton kept Miami’s offense in sync, dishing out 30 assists while the Canes hit .365 for the match. Templeton also had three blocks and three digs, while senior defensive specialist Kalysta White led the Canes with eight digs and tied for the team-high with two services aces.

“It’s very big,” Scott said of the win. “I feel like we’ll go into tomorrow’s match against UCF with positive vibes. Let’s hope that we keep it going for the next game.”

The Canes will host the UCF Knights in the James L. Knight Sports Complex on Friday night in their final match of the FIU/Miami Challenge. Click here to watch Friday’s match against UCF at 7 PM on ESPN3.