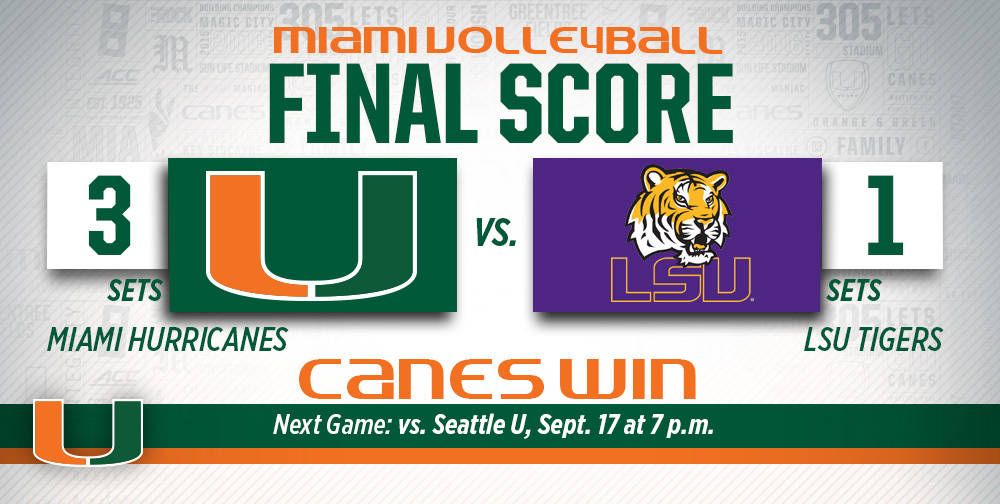 BATON ROUGE, La. – The University of Miami volleyball team closed out the LSU Tournament with a four-set victory over the host LSU Tigers.

Miami was led by middle blocker Alexis Mourning, who led the Canes in kills, blocks and attack percentage. The senior was one of two Hurricanes to tally 14 kills and added six blocks while hitting a team-high .542 against the Tigers. Mourning was one of three Hurricanes to be named to the All-Tournament team.

The Canes’ victory over LSU closed out a 2-0 weekend in Baton Rouge. Miami defeated No. 20 Purdue in five sets on Saturday night, securing the program’s firstwin over a ranked team since beating No. 12 North Carolina in five sets on Nov. 3, 2013. The victory was also the program’s first win over a ranked opponent away from Coral Gables since Miami beat No. 15 Wisconsin in four sets in the second round of the NCAA Tournament on Dec 7, 2002.

Miami will close out the non-conference portion of its 2015 schedule next week with the FIU/Miami Challenge, hosting Seattle University at 7 pm on Sept. 17 and UCF at 7 PM on Sept. 18. Both matches will be play at the James L. Knight Sports Complex and admission is free.