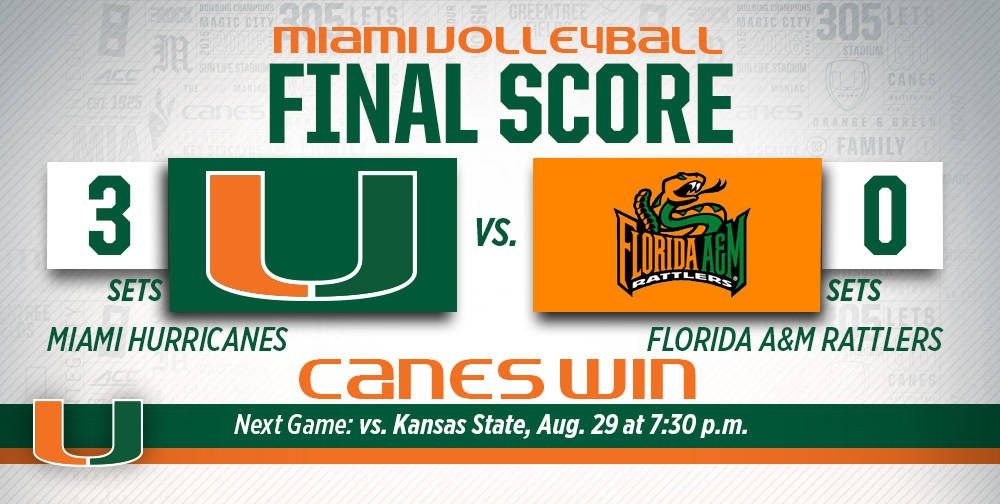 The Hurricanes (2-0) played 13 different players against the Rattlers, mixing and matching lineups and having several newcomers make their Miami debuts. Miami head coach Jose “Keno” Gandara was  happy to see his team adjust and implement their system.

“I think they’re a good serving team and they got us in trouble with the serve a little bit,” Gandara said. “We got back to the way we play. If you get distracted, you’re in for a long night, but if you stay focused on what you have to do then you should be fine. It was a good match for us. We were able to see a lot of girls play and overall it was good to get the win.”

Miami got off to a slow start in the first set, trailing 4-1 early. But the Canes made a push and won a tight opening set, 25-22. The Hurricanes struggled to attack efficiently, hitting just .188 in the opening set, but had kills from all five hitters.

The Canes and Rattlers were in another tight battle in the second set, but Miami prevailed 25-21. Olga Strantzali and Alexis Mourning combined for seven kills and the Hurricanes had three aces to help head into the intermission up 2-0.

“They play a little differently than us and that was something we had to get used to,” Mourning said. “We started playing our game and passing better and that helped us a lot.”

Taylor Scott and Kelsie Groot combined for seven kills in Miami’s 25-19 win in the third set to help the Canes secure their second win of the 2015 season.

“We have to trust the process,” Scott said. “If we trust each other and the system, it will pay off. I know we struggled at times, but everyone bounced back and that helped us get the win. As long as we play relaxed and trust each other I think we will be fine.”

“We trust those girls,” Gandara said. “We do it every day in practice. We mix parts, so it’s not different to play with different lineups, but it’s good to see them do it in a game.”