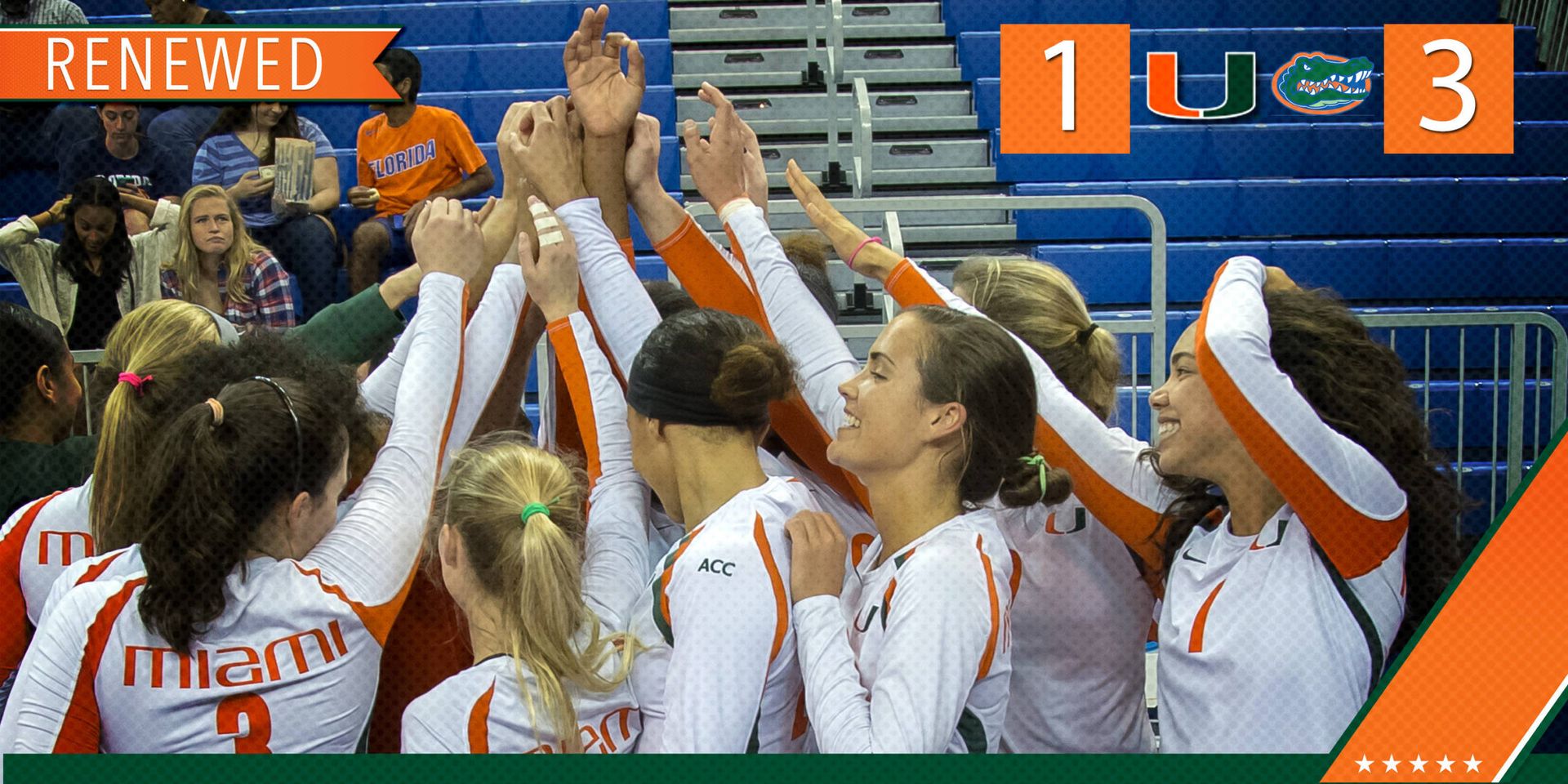 GAINESVILLE, Fla. – The University of Miami volleyball team dropped a hard-fought battle to No. 8 Florida, 3-1.

The Hurricanes (22-9, 14-4 ACC) saw their season come to an end in the second round of the 2014 NCAA Tournament, falling in four sets to the host Gators. But the already tight match may have been even closer than the score indicated.

“I am so proud of our team,” head coach Jose “Keno” Gandara said. “From where we started to where we are today, the way we played today in this environment against [Florida], hitting some of our best numbers all year is all we worked for and all you can expect in a match like this. That was our job, and that was our goal to play well throughout and see how far that will take us.”

Miami charged out to a 6-1 lead early in the opening set, forcing Florida head coach Mary Wise to call a timeout to try and slow the Hurricane momentum. The Canes continued their hot start leading by 10, 19-9, and finishing off a 12-point victory over the No. 8 Gators 25-13. Savanah Leaf led Miami with four kills, while Kelsie Groot and Haley Templeton each added three. Miami held the Gators to a -.029 hitting percentage in their opening set victory.

The Hurricanes’ momentum rolled over in the second set as Miami jumped out to an 8-3 lead against the Gators. But Florida answered back, taking their first lead of the day at 16-15 in the second set. The Gators would extend their lead to four, 23-19, and Miami’s late push fell short as Florida evened the match at one set apiece with a 25-22 win the second set.

After a tight playing tight early in the third set, Florida built a 11-6 lead. Miami battled back and tied the set at 17, but the Gators pulled away late to take the third set, 25-20, and take a 2-1 lead in the match. Groot, Leaf and Taylor Scott each had four kills in the third set.

Like the two previous sets, Miami and Florida found themselves in a tight battle in the fourth set. No team led by more than three points until the Gators reached a 11-7 advantage. But a resilient Hurricane team clawed back to get within one, 16-15. The Gators built a five-point lead, 23-18, and Miami could not battle back in time, falling 25-21 to drop the match.

Leaf closed out her Hurricane career with her 13th double-double of the season. The ACC Player of the Year posted 20 kills and 10 digs, adding three bocks and two service aces while hitting .381.

“They’re great players,” Leaf said of the Gators. “For me, I wasn’t too worried about who was on the other side of the net. I was more worried about just hitting high and just going after it and not leaving anything out there. I just wanted to hit as aggressive as I could, and I think if I worried about how tall they were or how well they’ve done this year, I wouldn’t have done so well, so I think just focusing on myself and my own game helped me a lot.”

Groot and Scott also posted double-digit kills for Miami. The junior Scott registered 12 kills, but Groot  continued her all-round play, tallying 11 kills while tying with Leaf for a team-best .381 attack percentage and leading the team with 17 digs to record her fifth double-double of the year.

“We’ve had some ups and downs, but here at the end, we’ve just really pushed and showed the team we can be and the team I think we will be,” Groot said. “We really showed it tonight. We fought hard for every single point, and I think that’s the team we want to represent here at Miami.”

“It was good to see our seniors; they carried the load all year,” Gandara said. “They had to do it facing some resistance. Teams look out for them, they’re expecting Savanah to get a lot of sets, and Emani, and they still put in the numbers and they help our team in so many ways. I am appreciative of the work and proud of what they did here in their four years. This is going to help us move forward with the young girls and the girls that are coming in.”