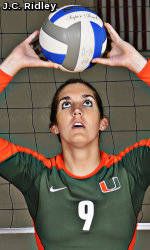 Lexington, Ky. – University of Miami senior outside hitter Lane Carico has been named to the American Volleyball Coaches Association (AVCA) All-America Second Team on Wednesday as announced by the AVCA Office. Teammates Ali Becker and Katie Gallagher were recognized as honorable mention performers after each was tabbed AVCA All-East Region a week ago.

For the second consecutive year, Carico is making her way onto the AVCA All-America Team, tabbed a Third Team member a season ago. The 5-11 outside hitter from Manhattan Beach, Calif. helped the Hurricanes advance to the second round of the NCAA Tournament in 2011, as well as making their third consecutive trip to the field of 64 for collegiate volleyball.

After being named to the All-East Region Team four consecutive years, she becomes the highest All-America player in school history by joining the Second Team. Carico is UMiami’s all-time leader in kills (1,749) and points (1,973.5), in addition to sitting second all-time in Hurricanes history for digs (1,715). After being named the 2011 Atlantic Coast Conference (ACC) Player of the Year – the first of its kind for a UMiami volleyball player, she was selected to the All-ACC Team for the fourth consecutive year following the 2011 regular season. Throughout the campaign, Carico led the Canes in kills (403) and service aces (30), finishing second in digs (443) and leading the team in points (453).

Becker, a senior middle blocker from Katy, Texas, was named to her first AVCA All-East Region Team last week after being selected to the All-ACC Team for the first time in November. Becker finished the regular season ranked in the Top 15 nationally for hitting percentage and led the Hurricanes for almost the entire season, ending the campaign with a .391 clip. She tallied 325 kills (2.90 k/s) with a team second-best 98 blocks (0.88 b/s). She also managed 60 digs while finishing second on the team in points (382.5).

Senior setter Katie Gallagher from Winter Park, Fla. is the third Hurricanes performer honored Wednesday by the AVCA. Gallagher is the UMiami all-time leader in assists, finishing her career with 5,173. She led the ACC in assists throughout the regular season with 1,218 (11.28 a/s) and was fourth on the squad in digs (291). She also finished third on the team in service aces (23) ending her career third in school history with 127. Gallagher leaves the UMiami program having played in more matches (131) and sets (477) than any other player in program history.

In 2011, the three seniors helped the Canes to their first NCAA Tournament win since 2002, defeating Northern Illinois in the Ames [Iowa] bracket of the Minneapolis [Minn.] Region, as well as helping UMiami into the Top 25 rankings of the regular season poll for the AVCA in nine of the 13 weekly polls. They also finished as the first group of senior players to compete in three consecutive NCAA Tournaments in school history.

For a complete listing of this year’s AVCA All-America Team, please click here.