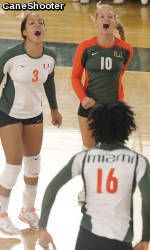 Ames, Iowa – Under the direction of head coach Nicole Lantagne Welch, the 25th-ranked University of Miami volleyball team will take on Northern Illinois University in its opening round match of the 2011 NCAA Tournament at Hilton Coliseum. The match is the first of two on Friday, Dec. 2 in the Ames [Iowa] bracket of the Minneapolis [Minn.] Regional.

Joining the Hurricanes in the bracket will be host and No. 4 overall seed Iowa State, as well as the University of Wisconsin-Milwaukee.

Miami (25-4) finished the regular season with its highest finish ever since joining the Atlantic Coast Conference with a second place showing in the final standings. The Hurricanes ended the slate with a 16-4 mark in league play, and finished the year with an 11-1 record overall inside the James L. Knight Sports Complex.

In first round action, Miami will take on the Northern Illinois Huskies on Friday, Dec. 2 at 5 p.m. (CST). If the Canes advance, they would face the winner of Iowa State/Milwaukee on Saturday, Dec. 3 at 6:30 p.m. (CST).

Live stats and video stream for the matches will be available at Cyclones.com.

SCOUTING NORTHERN ILLINOIS
Opening opponent NIU holds a record of 28-6 overall and ended the year 14-2 in the Mid-American Conference. The Huskies lost in the MAC Tournament title match against Central Michigan while the team is receiving votes in this week’s AVCA Coaches Poll Top 25.

The Huskies are charged by the nation’s leader in kills and points, Lauren Wicinski. The outside hitter has accumulated 639 kills (5.32) and hits at a .304 clip. As a team, the Huskies hit at a .282 clip under the guidance of MAC Coach of the Year, Ray Gooden.

SCOUTING IOWA STATE
The Iowa State Cyclones will host the first two rounds of the Minneapolis [Minn.] Regional as the fourth overall seed in this year’s tournament. The Cyclones are making their sixth consecutive NCAA Tournament appearance. They enter having lost their last match of the regular season to future SEC member Texas A&M.

Kristen Hahn paces the defensive efforts of the team, recently tabbed Big 12 Libero of the Year while pulling in a team-best 537 digs. Teammate Carly Jenson was voted as a unanimous selection to the All-Big 12 First Team after amassing a team-high 372 kills on the campaign. Joining Jenson on the All-Big 12 Team were teammates Jamie Straube (236 kills, 87 blocks) and Alison Landwehr (1,103 assists).

SCOUTING UW-MILWAUKEE
Milwaukee is making its ninth NCAA Tournament appearance, though the Panthers have never won a tournament match and no team from the Horizon League has ever won a match in the tournament. Milwaukee was last in the NCAA Tournament in 2009, losing in five sets to Dayton.

The Panthers hold an overall record of 25-4 and finished their conference season unblemished at 16-0 in the Horizon League. The Panthers enter working on an 18-match winning streak, certainly entering as one of the hottest teams in the nation.

SERIES AGAINST THE PANTHERS
Miami leads the all-time series against UW-Milwaukee by a 1-0 count, with the Canes taking a 3-0 decision over the Panthers back on Sept. 18, 2004.

Becker, Carico and Gallagher Earn All-ACC Honors
In addition to Lane Carico being named ACC Player of the Year, she made her third consecutive appearance on the All-ACC Team, joined by teammates Ali Becker and Katie Gallagher.

Becker leads the ACC with a .398 hitting percentage and ranks second on the Hurricanes squad with 92 blocks this season. She also ranks second on the team with 314 kills (2.99 k/s). In her career, Becker is fourth all-time at UMiami in total blocks (309), tied for fifth in block solos (38) and sits in sole possessions of fifth place in assisted blocks (271). She is also eighth all-time in points (1,008.5) and ninth in kills (828).

Redshirt senior setter Katie Gallagher became the school’s all-time leader in assists in early-November, now holding 5,105 in her career. This is her second All-ACC recognition after being named to the All-Freshman Team in 2007. Gallagher sat out a majority of the 2009 season with injury, earning the Winter Park, Fla. native a medical hardship waiver to compete this season.

Miami Seeking First NCAA Win Since 2002
Three consecutive appearances in the NCAA Tournament for the University of Miami volleyball team was not the goal at the beginning of the year. Advancing past the opening round and beyond was the goal. The Canes have not won an NCAA match since advancing to the Sweet 16 of the 2002 tournament. UMiami has been defeated in five-set thrillers each of the past two seasons in Gainesville [Fla.] and Bloomington [Ind.].

20 Wins, No Problem
With a 25-4 overall record, the Hurricanes have won at least 20 matches in consecutive years, as well as the third time in the last four seasons.

Carico Sets Another School Record
Lane Carico was named as this past week’s Atlantic Coast Conference Player of the Week, giving the All-America senior her fourth of its kind this season. For Carico, the award is a record for UMiami since joining the ACC in 2004. Overall, Carico has now tallied seven ACC Player of the Week awards since 2009. She also ties Jill Robinson for the most conference weekly awards in one season after Robinson grabbed four BIG EAST Rookie of the Week awards in 2003.

Always Bet on Becker
Senior middle blocker Ali Becker has surged onto the scene this year for the Hurricanes. The Katy, Texas native leads the league in hitting percentage and ranks 10th nationally in that category as she hits at a .398 clip. She leads the UMiami history books in that department, and is the highest ranked Hurricane ever in the NCAA for hitting percentage.