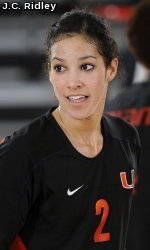 Greensboro, N.C. – Lane Carico of the University of Miami volleyball team was selected as this week’s Atlantic Coast Conference Player of the Week announced Monday by the conference office in Greensboro, N.C.

Carico, the 2011 ACC Player of the Year, helped the 25th-ranked Hurricanes finish the regular season strong with a 3-1 upset of 21st-ranked Florida State. The Manhattan Beach, Calif., native put down a season-high 29 kills against the Seminoles, the most any one player has had against Florida State this year. She hit .410 in the match as the Hurricanes hit at a .303 clip overall, the highest percentage by an ACC team against the Seminoles this year. Defensively, she tallied 17 digs to pick up her 11th consecutive double-double and 23rd overall. Additionally, Carico added a season-high five blocks. It is her fourth weekly award of the year.

For the senior All-America outside hitter, the award is her fourth of the 2011 season – a record for UMiami since joining the ACC in 2004. Overall, Carico has now tallied seven ACC Player of the Week awards since 2009. She also ties Jill Robinson for the most conference weekly awards in one season after Robinson grabbed four BIG EAST Rookie of the Week awards in 2003.

Miami has advanced to their third consecutive NCAA Tournament, soon to compete in the Minneapolis [Minn.] Regional and opening first/second round play in the Ames [Iowa] bracket. The Canes will take on Northern Illinois in their opening round match Friday, Dec. 2 at 5 p.m. Central. Joining UMiami in the bracket will be Iowa State – seeded fourth overall in this year’s field of 64 – and Wisconsin-Milwaukee.