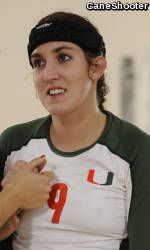 Coral Gables, Fla. – The 25th-ranked University of Miami volleyball team will travel to Ames, Iowa for the opening rounds of the NCAA Volleyball Tournament and Minneapolis [Minn.] Regional beginning Friday, Dec. 2 at Hilton Coliseum. The bracket is being host by Iowa State University.

Making its third consecutive trip to the NCAA Tournament, Miami (25-4) will serve as the visiting team in its opening round match against Northern Illinois on Friday, Dec. 2 at 5 p.m. Central.

The two winners of Friday’s play will meet on Saturday, Dec. 3 at 6:30 p.m. for a chance to advance to the Minneapolis [Minn.] Regional championship bracket hosted by the University of Minnesota.

For the Hurricanes, this will be their second consecutive trip to the Midwest for NCAA Tournament action after traveling to Bloomington, Ind. a year ago. Miami also advanced to the Gainesville [Fla.] Regional in 2009.

After a win Saturday against No. 21 Florida State, the Hurricanes wrapped up their most successful Atlantic Coast Conference season since joining the league in 2004. The Hurricanes closed the ACC slate with a record of 16-4, taking sole possession of second place in the final league standings. FSU won the ACC crown a week prior to Saturday’s season finale for both teams.

Miami is charged by ACC Player of the Year Lane Carico, the school’s all-time leader in kills and points, as she holds an average of 3.70 kills and 4.12 digs per set from her outside hitter position. The Manhattan Beach, Calif. native was named to her third consecutive All-ACC Team just last week.

Also leading the charge for the Canes are fellow All-ACC Team members Ali Becker and Katie Gallagher. Becker leads Miami up front with one of the nation’s best hitting percentages with a .398 clip while tallying 314 kills and 92 blocks. Gallagher leads the ACC with 11.39 assists per set and hits at a .283 average from her setter position.

Opening opponent NIU holds a record of 28-6 overall and ended the year 14-2 in the Mid-American Conference. The Huskies lost in the MAC Tournament title match against Central Michigan while the team is receiving votes in this week’s AVCA Coaches Poll Top 25.

Host Iowa State enters enjoying a record of 22-5 and ended the Big 12 season with a record of 13-3. Meanwhile, Wisconsin-Milwaukee holds a record of 25-4 and finished their conference season unblemished at 16-0 in the Horizon League. The Panthers enter working on an 18-match winning streak, while the host Cyclones dropped their season finale against future SEC member Texas A&M.