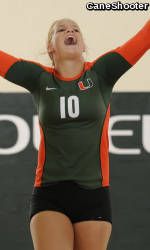 Coral Gables, Fla. – The 25th-ranked University of Miami volleyball team concludes the 2011 regular season Saturday, Nov. 26 when playing host to in-state rival No. 21 Florida State inside the James L. Knight Sports Complex at 5 p.m. The match will also serve as the first-ever meeting between ranked opponents in Coral Gables.

The Hurricanes enter the match having won nine of their last 10 matches, in addition to winning four consecutive at the James L. Knight Sports Complex. The Canes have dropped just a single match at home this year, a 3-1 decision to Georgia Tech back on Oct. 16. In fact, Miami has won 14 of the last 15 at home dating back to last season.

With the Canes coming in at 24-4 overall, three of their losses have come by way of a five-set decision. At 15-4 in the Atlantic Coast Conference, Miami will be looking for a chance to take sole possession of second place in the league. North Carolina and Duke are each 15-5, while the Canes swept the Blue devils and split the season series with the Tar Heels on the campaign. FSU has already wrapped up the regular season title at 18-1 in league play.

Following Saturday’s match against the Seminoles, the Hurricanes will hold a “Watch Party” for the NCAA Selection Show on Sunday at 5:30 p.m. inside the H-100 Room at the BankUnited Center on the campus of UMiami. All are invited to attend as snacks and beverages will be served.

SERIES INFO
All-Time Record: Florida State leads Miami, 20-15-1
Last Meeting: Florida State won 3-0 on Sept. 14, 2011 in Tallahassee, Fla.
Series Streak: Florida State won this year’s previous meeting between the two schools in a match televised nationally on ESPNU. The Seminoles have won eight of the last 15 matches, while the Canes own the other seven.

SCOUTING FLORIDA STATE
FSU has already clinched its third ACC championship, wrapping up any suspense for Saturday’s showdown against the top two teams in the conference. The Seminoles were sparked by senior Jekaterina Stepanova’s efficient play last weekend as they won four-set matches on the road against Clemson then Georgia Tech to seal their second conference crown in the last three seasons.

Stepanova leads FSU with 342 kills and averages 3.29 kills per set. She joined fellow senior outside hitter Visnja Djurdjevic and sophomore middle blocker Ashley Neff as members of the All-ACC Team, while freshman setter Sarah Wickstrom was placed on the All-ACC Freshman Team. Head coach Chris Poole rounded out the honors for FSU by being named the ACC Coach of the Year.

Carico Named ACC Player of the Year
Lane Carico, a senior from Manhattan Beach, Calif., becomes the school’s first ACC Volleyball Player of the Year after being named the school’s first AVCA All-America performer in 2010. She was tabbed to the AVCA Third Team after helping the Canes to consecutive NCAA Tournament appearances. During the 2011 campaign, Carico was named ACC Player of the Week three times – Sept. 5, Sept. 12 and Oct. 3. Carico is the school’s all-time leader in kills (1,698), while ranking second in digs (1,679) and fourth in service aces (120). She is also the school’s leader in points with 1,915.5 altogether.

She is also UMiami’s all-time leader in double-doubles, now holding 82 throughout her illustrious career. The three-time AVCA All-East Region performer is the only player in school history to amass 1,000 kills and 1,000 digs in a career.

Becker, Gallagher Join Carico on All-ACC Team
Ali Becker and Katie Gallagher each joined Lane Carico on the All-ACC Team. Becker has been ranked in the top 20 nationally and led the ACC in hitting percentage for almost the entire conference slate dating back to late September. For the native of Katy, Texas, this is her first All-ACC Team award. Becker leads the ACC with a .402 hitting percentage and leads the Hurricanes with 90 blocks this season. She also ranks second on the team with 307 kills (3.04 k/s). In her career, Becker is fourth all-time at UMiami in total blocks (307), tied for fifth in block solos (38) and sits in sole possessions of fifth place in assisted blocks (269). She is also eighth all-time in points (1,000.5) and ninth in kills (821).

Redshirt senior setter Katie Gallagher became the school’s all-time leader in assists in early-November, now holding 5,049 in her career. This is her second All-ACC recognition after being named to the All-Freshman Team in 2007. Gallagher sat out a majority of the 2009 season with injury, earning the Winter Park, Fla. native a medical hardship waiver to compete this season. Gallagher leads the ACC with 11.28 assists per set and a total of 1,094 overall assists. She also ranks third all-time at UMiami in service aces with 127, as well as fourth all-time in digs (1,181).