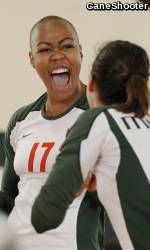 No. 22 Miami Headed for Showdowns at Georgia Tech, Clemson

Coral Gables, Fla. – The No. 22 University of Miami volleyball team heads out on the road for the final time during the 2011 regular season this weekend when traveling for Atlantic Coast Conference matches at Georgia Tech and Clemson. The Canes take on Georgia Tech on Friday, Nov. 18 at 7 p.m., followed by a match at Clemson on Saturday, Nov. 19 at 6 p.m.

The Hurricanes will take their eight-match winning streak to Georgia Tech, the last team to defeat UMiami (and the only team to do so at home on the campaign) back on Oct. 16. The Yellow Jackets defeated the Canes by a count of 3-1.

SCOUTING GEORGIA TECH
Junior Monique Mead continues to lead the ACC in kills per set and is second in the nation at 5.13. She also leads the ACC in points per set and ranks second in the country with 5.81. The Newnan, Ga., native has 10 double-doubles this season, 13 matches with at least 20 kills and has recorded double figure kills in each match this season. Mead is also averaging 2.57 digs per set and 0.79 blocks.

The Jackets have a dual threat at the setter position with Freshman Ali Santi dishing out 10.89 assists per set this year. Her 60 assists against NC State was good enough for fourth most in a game in the ACC this season and she also has five double-doubles under her belt. However, Kaleigh Colson has been taking the majority of the sets for the Jackets, netting 665 on the year in 68 sets for a 9.78 assist/set average, sixth in the ACC. Colson has dished out at least 40 assists in six of her last nine games, and had 67 last weekend against UNC and NC State.

SCOUTING CLEMSON
The team will honor the players and their parents on Friday night, and will then recognize Grad Student Cansu Ozdemir and senior Brittany Fennell for their contributions to the program over the past five years.

Ozdemir is finishing her fifth year at Clemson after graduating in May of 2011, and is now a grad student. She joined the team in 2007, and is the last remaining player from Clemson’s 2007 ACC Championship team, a season which she sat out due to injury. Ozdemir has put together a very solid all-around career, registering 1,059 digs, 232 kills, 200 assists, 107 blocks, and 92 aces over her career.

Fennell was forced to give up the sport after her sophomore season as she suffered a back injury. When healthy, Fennell was a strong middle, recording 152 kills and 112 blocks in 35 career matches. She was hitting .346 and averaging 1.07 blocks per set as a sophomore when she suffered her injury in 2009.