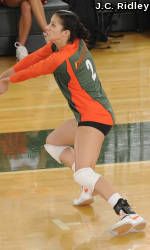 Coral Gables, Fla. – University of Miami All-America outside hitter Lane Carico has been named to the CoSIDA Academic All-District (District Four) Volleyball Team for 2011-12 announced Thursday afternoon. This is the first Co-SIDA All-District Award for Carico.

Carico, a senior from Manhattan Beach, Calif., was one of six student-athletes named to the District Four Team, joining players from Florida, Troy, Georgia State, Jacksonville State and UCF. Carico is currently majoring in Exercise Physiology at UMiami and holds a GPA of 3.57.

She is the school’s first AVCA All-America performer, picking up Third Team honors a season ago after helping the Hurricanes to consecutive NCAA Tournaments for the first time in school history. Additionally, she was named to the All-AVCA East Region Team for a third consecutive season.

In helping Miami to its second straight 20-win season this year at 21-3 overall – the third 20-win campaign in the last four years for the Canes, Carico is the school’s all-time leader in kills with 1,640. She is also the school’s all-time leader in double-doubles (78), while being named the Atlantic Coast Conference (ACC) Player of the Week three times in 2011. She is the only player in the league to have picked up multiple Player of the Week accolades this season.

In 2008, Carico was named the ACC and AVCA East Region Freshman of the Year. She was joined by teammate Maria Andersson on the All-ACC Academic Team following the 2008 and 2009 seasons, respectively.