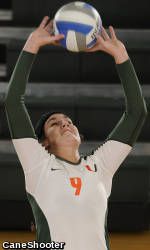 Greensboro, N.C. – University of Miami volleyball student-athlete Katie Gallagher has been selected as the Atlantic Coast Conference Co-Player of the Week (Nov. 7-13) announced Monday afternoon by Commissioner John Swofford from the ACC Office. Gallagher, a redshirt senior setter from Winter Park, Fla., is collecting her first ACC weekly award of the 2011 campaign after turning in a pair of memorable performances over the weekend for the Hurricanes.

Katie Gallagher is sharing the weekly award with Monique Mead of Georgia Tech who helped the Yellow Jackets to a pair of wins over the weekend as well.

Gallagher helped the Hurricanes beat NC State, 3-0, and North Carolina, 3-1. The win over UNC jumped Miami over the Tar Heels, giving them sole possession of second place in the ACC. UMiami is ranked No. 26 this week in the AVCA Coaches Poll, receiving the most amount of votes just outside the Top 25.

The conference leader in assists, Gallagher compiled 96 in the two-match stretch for a 13.71 average. In the win over North Carolina, she had 53 assists and had 43 against the Wolfpack. The Winter Park, Fla. native helped three players reach double-figure kills against the Tar Heels and four more against the Wolfpack. This marks her first award of the season and the second of her career.

The University of Miami returns to action Thursday, Nov. 10 when the Hurricanes visit Cameron Indoor Stadium at 7 p.m.