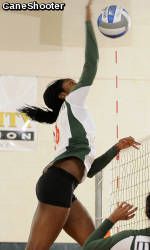 Greensboro, N.C. – University of Miami volleyball student-athlete Emani Sims has been selected as the Atlantic Coast Conference Freshman of the Week (Oct. 31-Nov. 6) announced Monday afternoon by Commissioner John Swofford from the ACC Office. Sims, a redshirt freshman middle blocker from Glenview, Ill., is collecting her first-ever ACC weekly award after turning a pair of memorable performances over the weekend for the Hurricanes.

In 3-0 sweeps of Virginia and Virginia Tech over the weekend, the Glenbrook South High School alum collected a 2.67 kills per set average to go along with 0.50 blocks per set. Sims managed nine kills – a season second-best for her – in the win against the Hokies in a televised match on Fox Sports as she hit at a .500 clip. She would go on to add two blocks (assisted) in the match.

Against the Virginia Cavaliers, Sims placed seven kills on 17 swings for a .294 hitting percentage to go along with a dig and a block (assisted). She was an intricate part of the offense against a tall and aggressive Virginia Tech front line that is second in the league in blocks and third in opponent hitting percentage.