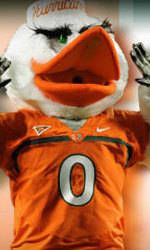 CORAL GABLES, Fla. –  The University of Miami Athletic Department and Spanish Broadcasting Systems Inc. (SBS) have partnered to bring the Canes athletic events to the Spanish Radio dial for another competitive season.

WRAZ- CIMA 106.3 FM (URL: http://www.cima1063.com/ ) will become the Spanish language flagship station of the Miami Hurricanes with the on-air team of Pepe “Chamby” Campos and Jose “Judge” Martinez. Martinez is a long time Canes broadcaster, while Campos is one of the most well-respected and tenured Spanish radio voices in South Florida.

“SBS (Spanish Broadcasting System, Inc.) is a perfect fit for the University of Miami Athletics because of their expansive reach on multiple stations in the market, as well as their firm and fervent commitment to the Hurricanes fan base,” said UM Director of Athletics Shawn Eichorst. “We have a long and proud tradition on Spanish radio and we firmly believe SBS will help expand our brand to new heights.”

WRAZ- CIMA 106.3 FM will broadcast every UM football game in 2011 and will air the majority of the Canes’ home men’s basketball games.

For the first time in UM history, the Canes women’s basketball program will have Spanish language radio broadcasts in 2011-12 with at least five home women’s hoops games slated to air locally.

The UM baseball team will continue its tradition of Spanish language radio with at least five games on CIMA 106.3 FM.

“We are thrilled to be the broadcast home of the Canes athletic events,” said Berry Jasin, National Sales Manager of Miami, New York and Puerto Rico of Spanish Broadcasting System, Inc. “Partnering with our hometown sports team makes sense for our listeners and for WRAZ – CIMA 106.3 FM. Adding sports to our line-up compliments our other programming, enhances the experience for loyal fans and attracts new listeners. We could not be prouder of our association with The University of Miami Athletic Department.”

SBS also owns and operates the following stations, which were among the top six Spanish language stations in terms of listenership over the months of June, July and August 2011 according to Radio-Info.com:
• WRMA- Romance 106.7FM
• WXDJ- El Zol 95.7FM
• WCMQ-Clasica 92.3

Spanish Broadcasting System, Inc. is the largest publicly traded Hispanic-controlled media and entertainment company in the United States. SBS owns and/or operates 21 radio stations located in the top U.S. Hispanic markets of New York, Los Angeles, Miami, Chicago, San Francisco and Puerto Rico, airing the Tropical, Mexican Regional, Spanish Adult Contemporary and Hurban format genres. SBS has 3 of the top 6 Spanish-language stations in the nation including the #1 Spanish station in America, WSKQ-FM in New York City (WPAT is ranked #3 and KLAX is ranked #6). The Company also owns and operates MegaTV, a television operation with over-the-air, cable and satellite distribution and affiliates throughout the U.S. and Puerto Rico. SBS also produces live concerts and events throughout the country and operates LaMusica.com, a bilingual Spanish-English online site providing content related to Latin music, entertainment, news and culture. The Company’s corporate Web site can be accessed at www.spanishbroadcasting.com.