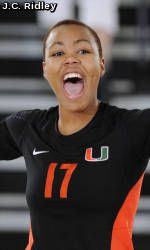 No. 20 Miami Volleyball to Play on ESPNU

The Canes and Seminoles are part of ESPNU and the Wednesday Night Volleyball package. The match will feature play-by-play from Adam Amin and analysis from Elizabeth Moreau. First serve is scheduled for 8:02 p.m.

Miami (9-0) is one of the hottest teams in the ACC right now, recently moving into the AVCA Coaches Poll Top 25 for the first time since the end of the 2002 season. That same year, the Canes advanced to the “Sweet 16” of the NCAA Tournament under head coach Nicole Lantagne Welch in just the second year back for the UMiami program. The volleyball program was inexistent for 20 years until 2001.

Dating back to last season, Miami has won 14 consecutive regular season matches. The Canes are enjoying their second-best start since 2008 when the team began the year 13-0, including three regular season tournament wins in San Francisco, San Marcos, Texas and the Hurricane Invitational, respectively.

The road opponent in the series has won four of the last five matches. The Seminoles hold a 19-15-1 overall lead in the series that dates back to 1978. Since UMiami joined the Atlantic Coast Conference back in 2004, the two longtime in-state rivals have split their 14 matches played. However, Miami won the last meeting between the two schools at the end of the 2010 regular season in Tallahassee.

The Florida State Seminoles have a record of 6-4 with two tough losses last weekend against nationally-ranked Michigan and Pepperdine. FSU garnered votes this week in the AVCA poll after falling out with the weekend losses.

Last weekend in the Hurricane Invitational versus Auburn, Lantagne Welch collected her 200th career victory on the strength of the Hurricanes’ 3-0 sweep of the Tigers.

Coaching Milestone Achieved
UMiami head coach Nicole Lantagne Welch collected her 200th career win over the weekend in the Canes 3-0 win over Auburn. Lantagne Welch is already the winningest coach in UM volleyball history, and has served as the only coach since the program was brought back in 2001.

Starting Off Hot
The Hurricanes are off to their second-best start since 2008. Miami began the 2008 campaign with a 13-0, and is off to a quick 9-0 mark this year with three regular season tournament wins.

The Manhattan Beach, Calif. native compiled 30 kills on a .258 hitting percentage for 3.75 kills per set and had 32 digs in eight sets. She also had five blocks and four service aces. Carico came up huge in the win over No. 18 Oklahoma with 19 kills and 16 digs to help pull off the come-from-behind upset. It was the first victory over a ranked opponent for the Hurricanes since December 7, 2002, when Miami beat No. 15 Wisconsin in the NCAA Tournament.

Gallagher Moves into Record Books
Over the weekend, redshirt senior setter Katie Gallagher became just the second player in UMiami volleyball history to post at least 4,000 assists and 1,000 digs in a career. She joins Jill Robinson (2003-06) as the only other Hurricanes player to do so.