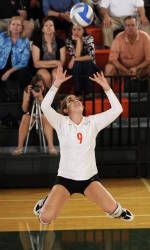 GREENSBORO, N.C. – The University of Miami volleyball team has been predicted to finish fourth in the Atlantic Coast Conference in voting by the league’s head coaches and announced Tuesday by Commissioner John Swofford. Meanwhile, Hurricanes Lane Carico and Katie Gallagher were selected to the Preseason All-ACC Team.

The predicted order of finish was voted on by the league’s head coaches.

Last season, the Hurricanes finished in third place at 13-7 in the Atlantic Coast Conference, ending the season with a 23-9 overall record en route to their second consecutive NCAA Tournament appearance.

Gallagher was named as an AVCA East Regional All-America honorable mention performer in 2010, while Carico was named an AVCA Third Team All-American. In the process, she became UM’s first AVCA All-America performer.

After being named to the All-ACC Freshman Team in 2008, Carico earned all-conference honors each of the last two years. She was also named 2008 ACC and AVCA East Region Freshman of the Year, and was selected as an AVCA All-America honorable mention player in 2008 and 2009. In addition, she has been named to the AVCA All-East Region Team all three years at UMiami.

A total of 10 teams are represented on the 2011 Preseason All-ACC Team. Duke led all conference teams with four selections. Florida State, Georgia Tech, North Carolina, Virginia Tech, and Miami all had two representatives. Clemson, Maryland, Virginia, and Wake Forest completed the squad with one player apiece.

The All-ACC squad is comprised of 18 total players, two of which are designated as defensive specialists.The team is headlined by Miami’s Carico and Duke’s Kellie Catanach.

The season gets underway Friday, August 26 with 11 of the conference teams in action, including Miami. The 2011 ACC volleyball championship will be determined by the final regular season standings with the ACC champion receiving an automatic bid to the 2011 NCAA Volleyball Championship.

The Canes will open their season against Jacksonville State at the Tiger Classic in Baton Rouge, La.

For more information on this year’s Preseason All-ACC Team and the predicted order of finish, please visit TheACC.com.