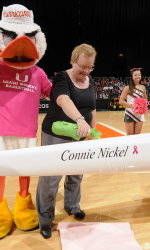 Coral Gables, Fla.- Head coach Andrew Carter and the rest of the Women’s rowing team christened two new shells during a special halftime ceremony during the Miami Women’s Basketball Game this past Monday.

The boats, named “Connie Nickel” and “Mary Louise,” each have a special meaning behind the names, and will be part of the rowing fleet for the upcoming 2011 season.

“It’s something that we use to honor people who have made significant contributions to a program,” said Carter.

Connie Nickel, who is the Associate Athletic Director for Internal Operations and the Senior Women’s Administrator here at the University of Miami, has dedicated her time and effort to the rowing program. As a survivor of breast cancer and staunch supporter of the program, Carter found it fitting to dedicate the boat to her at halftime of the WBCA PinkZone game.

“Connie has been incredibly supportive in the transition to a new coaching staff, and the redevelopment of the women’s rowing program. With Connie just having beat breast cancer, I found it particularly fitting at that time to acknowledge the support she’s had for our program but the inspirational leadership she’s shown to the woman of our department,” said Carter on his decision to name the boat “Connie Nickel”.

Carter and the rowing team allowed John Blaney, a donor who gave generously to all the Olympic sports at the University of Miami, to name the second boat. He named the vessel the Mary Louise, after his wife.

The spring rowing season kicks off on March 5th, when the Hurricanes head to Tampa to face the Michigan Wolverines.