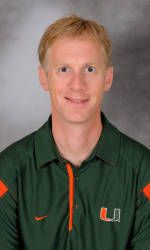 Coral Gables, Fla. – Under the direction of second-year head coach Andrew Carter, the University of Miami rowing team announced the names of six signees to National Letters of Intent on Fri., Dec. 10, during the 2011-12 early signing period for collegiate rowing.

The signing class for the Hurricanes includes Sophie Doughty, Nicola Eick, Fay Gilbert, Hannah Hawks, Sarah Kurzu and Devon Phelan-Patton that plan to participate for the `Canes during the 2011-12 campaign. When speaking on the signing class, Andrew Carter was excited about the signees he and his staff assembled during the early signing period.

“I am exceptionally pleased to welcome Hannah, Sophie, Devon, Faye, Sarah, and Nicky to the Hurricanes family,” said Carter. “Not only are all of them bringing terrific athletic credentials with them, but they’re each exceptional academic performers, which is going to be important to their overall success at the University of Miami. Beyond their strong rowing and academic résumés, I think what’s most striking about this class is their character. There is no question that each is going to add tremendously to our program on a variety of levels.”

The first signee is Hannah Hawks, a native of Charlotte, N.C., and product of Lake Norman High School. Hawks has been an integral part of the Charlotte Youth Rowing Club for the past three years, competing regionally with success at regattas such as the Head of the Hooch and U.S. Rowing Southwest Regional Championships. As a novice, she showed great promise, winning both of these regattas, and she has developed into the top prospect out of the Charlotte-Mecklenburg area.

“Hannah stood out to me from the moment I met her and observed her rowing at a camp this past summer,” expressed Carter. “She not only brings great fitness and solid rowing fundamentals, but also an infectious enthusiasm.

“I am so thrilled that I have been given the opportunity to be part of the Miami Hurricanes rowing team next fall,” expressed Hawks. “The team’s love and dedication to the sport; desire to work hard to make their goals a reality; and team camaraderie is exactly what I wanted in a rowing program. I can’t wait to bring everything I have to offer to my new home in Coral Gables.”

The second signee is Sophie Doughty, who will come to UM via Marblehead, Mass., where she currently serves as a coxswain for Community Rowing, Inc. – one of the top junior rowing programs in the United States. In addition to her rigorous rowing schedule, Doughty’s diligence and creativity has helped her to win the Outstanding Work award in Architecture and Design, in addition to awards in French and U.S. Legal Studies.

“Sophie is an incredibly bright and mature student-athlete with coxing experience in one of the top-performing junior rowing programs in the country,” commented Carter. “Her skill, leadership ability, and presence were obvious when I had the opportunity to see and hear her in action. These are qualities we’re looking for in our coxswains, and in Sophie we found a terrific fit.”

Doughty was equally as excited about bringing her efforts to Coral Gables and the UM rowing program.

“I am really looking forward to attending the University of Miami,” said Doughty. “I enjoyed all of the people that I met on my visit and I’m eager to be joining such a strong athletic tradition. The School of Architecture is gorgeous and will be a wonderful place to study.”

Devon Phelan-Patton from Fairport, N.Y., is the third signee for the `Canes. She has spent the past three years competing at some of the most competitive regattas in North America, including the Head of the Charles and the Royal Canadian Henley Regatta. Beyond her rowing, Phelan-Patton has also lettered in Nordic skiing, showing her versatility and level of fitness.

“Devon is clearly a dedicated student-athlete, and I was impressed with her as a person when we first met,” stated Carter. “Her work ethic is clear – both on and off the water – resulting in her becoming an `A’ student and member of the National Honor Society, all while training for two rigorous sports like rowing and Nordic skiing. This type of drive is going to make her successful at the University of Miami and a pleasure to coach.”

“I am really excited for the awesome opportunity to go to Miami and not only grow as a rower, but as a person,” said Phelan-Patton on her decision to attend UM in the fall of 2011.

The fourth signee is Fay Gilbert of Chicago, Ill., who brings several years of experience from the Lincoln Park Juniors program. As a member of LPJ’s top 8+, Gilbert has helped propel that program to the top of the Midwest Region.

“Fay Gilbert has been a real pleasure to get to know during the recruiting process,” said Carter. “One of the things that stood out about Fay during this time was her incredible enthusiasm for the University of Miami. Her strong rowing résumé aside, the fact that Fay is `such a Hurricane’ will make her an excellent teammate and member of our squad. I don’t think that quality can be overestimated when evaluating what will contribute to our future success.”

“I have been lucky to look at a lot of colleges, but the University of Miami stood out from the very beginning,” commented Gilbert. “The academic and athletic standards of the school were a huge reason for choosing to attend UM. With the top notch Marine Science program and the up-and-coming rowing program, it was the perfect match for me.”

Miami’s fifth signee is Sarah Kurzu, who will join the rowing program from nearby Hallandale Beach, Fla., though originally from the state of Missouri. She moved to Hallandale Beach this past summer, and has made the Miami Rowing Club her rowing home. Since then, Kurzu has participated throughout the region at such regattas as the Head of the Indian Creek, Head of the Hooch and Head of the Charles.

“I had the opportunity to meet Sarah and her family very early in our recruiting year, and I knew from the start that she would do really well at Miami,” stated Carter. “She has a great deal of natural ability, and that’s going to help us in both the short and long term. Sarah has a wonderful family that is obviously very supportive of her in all she does. This is reflected by her great performance level in the classroom and on the water.”

The final signee for the `Canes in the early signing period is Nicola “Nicky” Eick of Raleigh, N.C. She has spent the last four years with the Raleigh Charter High School program, and most recently joined the Triangle Community Rowing Club. In addition to rowing, Eick has also played four years of varsity basketball at Raleigh Charter and is a recipient of the Congressional Gold award.

“Nicky’s recent progress in rowing has been impressive, and knowing that it has come while dedicating half of her year to basketball, it’s that much more so,” commented Carter. “She brings a great set of natural gifts to her rowing, which does much to explain her ability to be successful as a two-sport athlete. I’m really looking forward to seeing what she can accomplish when she focuses solely on rowing.”

The UM rowing team is now continuing to train during the winter break, and will get back to the waters for head-to-head action again on Mar. 5, 2011, joining the University of Michigan for a scrimmage event in Tampa, Fla. The time for the event is 9 a.m., and admission is free as all are encouraged to attend.

For more information on the University of Miami rowing team, please log on to HurricaneSports.com. Once there, you will find up-to-date news, stats and information regarding the Hurricanes rowing program.

You can keep up-to-date with all UM Athletics via twitter at Twitter.com/HurricaneSports. You can also become a fan of the ‘Canes on Facebook at Facebook.com/MiamiHurricanes.