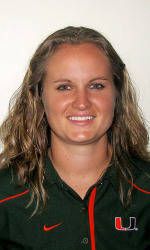 Breimann was a four-year letter winner in rowing at Clemson from 2003-2007. Rowing with the freshman 8+ and the second varsity 8+ in her first two years, Breimann became a fixture in the Tigers’ first varsity crew in both her junior and senior years. During her time in the top crew, the Tigers ranked as high as 12th in the nation. Breimann also succeeded in the classroom, being named a four-time member of the Atlantic Coast Conference Academic Honor Roll.

“I’m incredibly pleased to be able to have Barbi Breimann as a member of our coaching team,” said Carter. “I’ve had the good fortune to work with her on past campaigns, and adding her to our staff is a terrific opportunity. Coach Breimann’s experience as a stand-out athlete within the ACC and NCAA gives her a great perspective, and I know she will bring that to our student-athletes. Working with her as a coach and administrator was a great experience, and there is no doubt that she will add tremendously to our program.”

Breimann will begin her duties immediately, which will include both recruiting and coaching the novice division, in addition to serving as both a key off-campus recruiter and the Director of Operations for the Hurricanes Rowing program.

“I am very excited and grateful for the opportunity to join the University of Miami’s athletic department,” expressed Breimann. “I look forward to building upon previous successes of the talented group of women rowers at Miami. To be part of such a well-respected program is an honor and a privilege.”

A native of Greenville, S.C., Breimann earned her Bachelor’s Degree from Clemson in Financial Management in 2007. She went on to achieve her Master’s Degree in 2009, majoring in Human Resource Development.