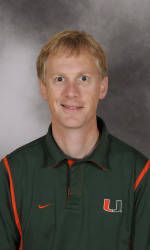 Orlando, Fla. – The University of Miami Varsity Four boat collected a win on Saturday, as the Hurricanes rowing team concluded the regular season at the UCF Regatta against UCF and Alabama at the UCF Intercollegiate Rowing Center in Orlando, Fla.

The Hurricanes took to the waters of Lake Pickett against homestanding UCF, taking part its lone home regatta of the year, as well as Alabama out of the Southeastern Conference (SEC).

The final race for UM was the Second Varsity Four, where the `Canes posted a third place time of 9:43.1. Alabama picked up its second win of the day, as the Crimson Tide turned in a performance of 9:13.3. The host Knights were second at 9:25.4.

After the races, the University of Central Florida and fans honored former Knights rower Courtney Nelson Patterson with a plaque dedication and memorial ceremony.