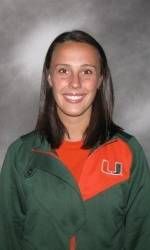 Competing for the first time in one of the east coast’s largest regattas, the Hurricanes took part in six races. Three crews competed twice for UM, with the first race being a qualifier for the semifinals. In the semifinals, the boats were placed into three different finals class consisting of A, B, and C finals which will take place on Sunday.

The `Canes opened the day with two boats competing in the Varsity Four. The “A” boat for UM crossed the finish line first with a time of 7:50.39, defeating boats from Iona, Fairfield and Villanova. The `Canes “B” boat crossed third overall with a mark of 8:17.79.

“It was a pretty good day today for us,” stated UM first-year head coach Andrew Carter. “This is a terrific regatta, and the weather was challenging for us, but it was for everyone else as well. It was breezy today, but fair. The racing has gone pretty well for us, and our novice four is doing very well.”

The weather delayed racing by almost an hour on Saturday, with strong breezes running across the water the entire morning, stretching into the afternoon and early evening of racing. Miami’s Novice Four seemed to handle the weather very well, as they crossed the line with a winning time 8:26.18 in their heat, rushing past crews from Connecticut, Temple and North Carolina. That will earn the UM first novice four boat a trip to the “A” finals tomorrow.

All but two Atlantic Coast Conference (ACC) teams are taking part in this weekend’s event, with the lone exceptions being crews from Virginia and Clemson.

In the semifinals of the Varsity Four competition, UM rowed to a second place time of 7:41.81. Miami’s Varsity Four “A” boat will compete on Sunday in the “A” final, while the “B” boat will take part in the “B” finals, according to time. The “B” boat finished fifth in their heat of the semis, crossing the line at 8:10.29.

Miami’s Novice Four boat came back in the semifinals for a winning time of 7:59.33, defeating crews from Loyola, Connecticut, West Virginia, Lafayette and Pittsburgh.

“Our Varsity Eight rowed pretty well, and they executed well,” stated Carter. “It just appeared that it was late in the day, and they lost their legs after so many of the girls racing in other races earlier in the day. But it was good to see them compete hard, and we wanted to see how they could adjust to racing in multiple races, and how they could handle the pressure of that. Overall, I thought they handled it well, and executed the things we have been going in practice quite well.”

Racing will continue tomorrow for the Hurricanes, as they conclude the two-day event with finals races in varsity and novice action. With men’s racing taking place this weekend at the Knecht Cup, this year’s field of crews is more than 70 teams strong from all across the eastern seaboard.

“The atmosphere here this weekend is quite well, and the directors and coaches of the regatta here at Villanova have done a great job,” expressed Carter. “They’ve done a fantastic job here. The weather has put us back a bit, but there’s nothing anyone can do about that. Other than that, the crowd has been great with people cooking out and grilling, and just really being into the racing all day long. It’s just a great racing venue they have here this weekend, and we’re excited to be a part of it this year. It’s a good challenge for our team, and will do nothing but give us the experience we’ll need further down the road.”

For complete results of day one action at the Knecht Cup, please locate your internet browser to http://www.villanovarowing.com/knecht/realtimeResults.html. Lane assignments and a schedule of the races for Sunday may be viewed through the provided link as well.