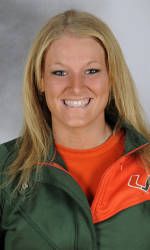 Greensboro, N.C. – The University of Miami placed six crew members on this year’s All-ACC Academic Rowing Team, finishing with the second-most student-athletes present as the official team was announced Friday morning by the conference office in Greensboro, N.C. The Hurricanes rowing team finished the 2008-09 season tying their highest-ever finish in the ACC Championships, registering a third place showing at Melton Lake in Oak Ridge, Tenn.

For Cordner and Wingrove, they are picking up their second consecutive All-ACC Academic Team honor. As for Sajincic, she was tabbed a CRCA (Collegiate Rowing Coaches Association) scholar-athlete following a season in which she split time rowing both two-seat and bow for the Hurricanes’ Varsity Eight boat.

A total of two All-Americans, 12 CRCA Scholar-Athletes and three CRCA All-Region honorees are featured on the 2009 All-ACC Academic Rowing Team. The 34 rowers were selected from a pool of 117 nominees from the ACC’s six schools who sponsor rowing–Boston College, Clemson, Duke, Miami, North Carolina and Virginia–an impressive average of almost 20 nominees per school.

To be nominated for the ACC All-Academic team, student-athletes must have recorded a minimum of a 3.0 grade point average in the winter semester and have maintained a 3.0 career GPA at their respective schools. Once the qualification standard is met, selection to the team is then based on a combination of academic and athletic achievement.

Clemson led all schools with 11 selections followed by Miami with six honorees, Duke with five, and Boston College, North Carolina and Virginia with four each.

Nance was one of nine All-ACC honorees who also earned selection to the All-ACC Academic team. Joining Nance were Leidecker, Bendik and Cummings of Clemson; Maciolek and Laura Harvey (Wethersfield, Conn.) of Boston College; Cordner and Wingrove of Miami; and Lesley King (New Castle, Wash.) of Duke.

The Hurricanes rowing team is now under the direction of head coach Andrew Carter who arrived at UM via Clemson University where he served a one-year stint as an assistant coach for the Tigers. With the Tigers, Carter helped Clemson achieve a No. 9 national ranking going along with eight top-three finishes during the fall season, as well as helping the Tigers claim their first-ever Atlantic Coast Conference (ACC) Championship. With the ACC crown, the Tigers earned their first NCAA Championships appearance. Carter personally coached the Tigers’ NCAA Champion Varsity 4+ crew at the NCAA Championships on May 31 in Cherry Hill, N.J.

For a complete list of this year’s All-ACC Academic Rowing Team and all the latest conference news, please locate your internet browser to www.hurricanesports.com.