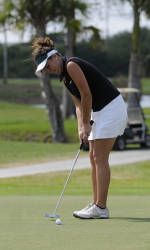 San Jose, Calif. — The 2009 Juli Inkster Spartan Invitational was cancelled on Tuesday due to inclement weather in the San Jose area. The University of Miami women’s golf team and 15 other teams were competing in the tournament hosted by San Jose State University.

After the tournament was suspended on Monday, play resumed at 8:30 a.m. (PST) Tuesday morning, but was suspended again at 11 a.m. The determination to cancel the remainder of the Invitational was made just before noon due to the rain and course conditions at the Almaden Country Club.

Miami will next be in action Mar. 30-31 at the John Kirk/Lady Panther Intercollegiate hosted by Georgia State.