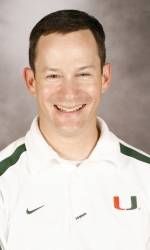 Coral Gables, Fla. – Robbie Tenenbaum, head rowing coach at the University of Miami, announced the hiring of three new assistant coaches to his staff Tuesday morning as the 2008-09 season rapidly approaches. The coaches include Boban Rankovic, Margaret Matia and Joel Furtek–an experienced group with proven talent on and off the water as rowers and coaches.

“I am elated that Boban, Margaret and Joel have joined the Hurricane Rowing Family,” stated head coach Robbie Tenenbaum. “Boban will assist me with the varsity squad and recruiting, while Margaret will take charge of our Novice squad. Joel will be stationed out at the boathouse, where he will be in charge of our rowing facility.”

Rankovic brings a wealth of experienced rowing on all levels of competition, including the 2000 Summer Olympic Games in Sydney, Australia for his home country of Yugoslavia. He joins the Hurricanes after the spending the past four years as the head coach for the Miami Beach Rowing Club.

“Boban brings Olympic and international experience to the Hurricanes,” states Tenenbaum enthusiastically. “He will assist me in our recruiting efforts, and he will also help coach the varsity student-athletes on our team. He is a natural-born leader, both on and off the water, and will be a great role model for our student-athletes. I’m so happy to have him on our staff this year.”

While completing his Master’s Degree in General Management at Dowling College, Rankovic served as head coach and Assistant Athletic Director at Dowling. As head coach for the Golden Lions, he helped to lead the first varsity four-person crew to a first place title at the 2003 Head of the Charles and 2004 Dad Vail Regatta.

Matia will serve as the novice coach for the Hurricanes program. She is a Level Two United States Rowing Certified Coach, and comes to UM after spending the past year coaching at Yorktown High School in Arlington, Virginia. Her experience coaching also spreads to her recent time spent at Georgetown Day School (Washington, D.C.) and with the Thompson’s Boat Center, also located in the nation’s capital.

“I am excited to have Margaret join our staff here at the University of Miami,” expressed Tenenbaum. “She brings a great amount of experience as a top level collegiate and international athlete, and tons of enthusiasm. She is a welcomed sight to our staff.”

During her collegiate career at UVA, Matia earned First team All-America honors as a senior. Also an All-ACC and Academic Honor Roll honoree, the former Cavaliers captain was a four-time Atlantic Coast Conference (ACC) Champion, as well as a three-time NCAA participant.

“Boban brings with him Olympic Rowing experience from the Sydney 2000 games, and Margaret won a gold medal in the 2007 Pan American Games,” continued Tenenbaum. “This elite level of experience is going to give our current student athletes a new level to aim towards.”

An experienced collegiate Boatman with proven leadership, Joel Furtek enters his first season as the boatman/rigger for the University of Miami Hurricanes rowing staff under head coach Robbie Tenenbaum.

Furtek brings over 16 years of rowing expertise, and rigging experience to the Hurricanes staff, including five years as head coach at the University of North Carolina in Chapel Hill.

“Joel Furtek is the program’s first full-time boatman/rigger,” stated Tenenbaum. “He will not only be in charge of the safety and upkeep of our equipment, but he will also help us in areas of preparing video, purchasing, and water and travel safety. Joel’s experience as a program director for many years will also help our staff to prepare our team to be the very best they can be.”

A four-year member of the Yale crew, he was the coxswain for the Bulldogs’ lightweight crew that went undefeated on its way to the 1990 national collegiate rowing championship and competed at the prestigious Henley Royal Regatta in England. In his senior year, he was awarded the Henry Babcock Award for outstanding spirit. Furtek also coxed at the Kelly Challenge in Mandelieu, France and at the U.S. National Team Selection Camp in 1993. He also has skulled and rowed competitively with the Rivanna Rowing Association in Charlottesville, Va.

One of his earliest coaching exploits was at the University of Virginia in 1992 where he headed the novice program for the Cavaliers. While at Virginia, he coached his novices to an undefeated Southern Championship season in 1996, followed immediately by a victory at the San Diego Crew Classic and a bid to the first-ever NCAA Championship in 1997.

That’s when he was tapped to be the inaugural head coach of the rowing team at the University of North Carolina in Chapel Hill. Starting with a blank sheet of paper, Furtek’s Tar Heels burst out of the gate with a Central Region Championship and NCAA bid in their first year, with the Carolina varsity four earning a Bronze Medal at those 1998 NCAAs.

For more information on the coaching additions at UM, please call the University of Miami Sports media Relations Office at (305) 284-3249. You can also log on to the official website for Miami athletics at www.hurricanesports.com.