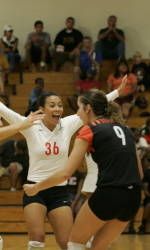 “Playing in the Division I Florida Invitational Beach Championships is a great opportunity for our players,” head coach Nicole Lantagne Welch said. “Playing doubles gives our players a chance to really develop their all-around skills and ball control, since all players have to be able to do everything. Having to move and jump in the sand is also great training for the indoor game.”

Miami and USF will each feature six teams, FAU and MSU will field four apiece, UNF and Webber have three teams represented and FGCU is placing just one squad in the field. Play is set to begin at 9 a.m.

“Beach volleyball is an NCAA emerging sport and with its success in the last Olympics and most likely again this summer, it will not be surprising to see it as a collegiate sport down the road. This will be a great event to test those waters now and get a better feel of how it could be a compliment to the indoor game.”

The Hurricanes have won 20-of-24 games so far this spring, including a 10-game sweep over five in-state foes –Barry, UCF, FAU, Lynn and Nova Southeastern – two weeks ago in a round-robin style tournament at the Knight Sports Complex.