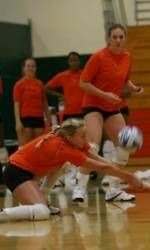 CORAL GABLES, Fla. – The University of Miami volleyball team continued its stellar play this spring winning all 10 games against five in-state opponents at the Knight Sports Complex on Saturday. The Hurricanes, who have now won 20-of-24 games this spring, swept Barry, UCF, FAU, Lynn and Nova Southeastern in a round-robin style tournament in UM’s final home event this spring.

“I was pleased that we were able to win all 10 games,” head coach Nicole Lantagne Welch said. “Its never easy maintaining your focus for such a long period of time but our team did a good job of keeping their effort at a consistently high level throughout the day.”

“It felt good to go undefeated in our last time competing in our home gym this spring,” sophomore libero Cassie Loessberg said. “Our team has continued to get better as the exhibition season has progressed and a day like this just helps set the tone for our program heading into next year.”

All games on Saturday were played to 25, falling in line with the NCAA’s new scoring system for the 2008 fall season. The Hurricanes held their opponents to under 20 points in six of the final seven games.

“Maria [Andersson] was rock solid out there for us all day, playing consistently from start to finish,” Loessberg added. “And our setters — Bridget [Bomhack] and Katie [Gallagher] — did a good job taking blocks out and putting our hitters in a position where they could execute their attacks.”

After taking 3-of-4 against Wichita State and 4-of-4 versus FAU to open the exhibition season, the Hurricanes split six matches with the Southeastern Conference’s top team in Florida before taking all 10 games on Saturday.

The `Canes will close out their spring exhibition season when they compete in the Florida Division I Collegiate Beach Tournament, April 19, in Siesta Key, Fla.