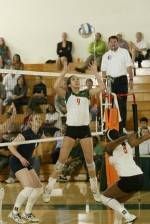 The Hurricanes looked impressive in their first two structured matches since the conclusion of the 2007 season, winning all four games against host FAU in addition to taking 3-of-4 from 2007 NCAA Tournament participant Wichita State.

“It felt good to take three out of the four games from such a strong team like Wichita State,” junior outside hitter Bridget Bomhack said. “Our team is playing with a lot of confidence right now and everyone was really excited to be back in action. The spring season is always a great time for everyone to get a lot of reps and we have definitely made some improvements as a team already.”

UM will take on another in-state opponent in the University of Florida this weekend when it hosts its first match of the spring at the Knight Sports Complex. The match against the Gators is slated for 9:30 a.m. and is open to the public.

“After a strong start to our spring, we are looking forward to facing a team of Florida’s caliber,” head coach Nicole Lantagne Welch said. “This challenge will give us a great opportunity to gauge our progress thus far and really find out the areas we will need to focus on for the rest of our spring.”

The Hurricanes will remain at home next weekend when they host a six-team tournament featuring UCF, FAU, Berry, Nova Southeastern and Lynn before closing out the spring season when they participate in the Florida Division I Collegiate Beach Tournament, April 19 in Siesta Key, Fla.

“We are continuing to improve rapidly but still have so much more work ahead of us to be as prepared as possible for the fall,” Lantagne Welch added.