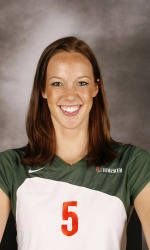 Down Under With Ciara Michel

Just a few months after wrapping up her record-breaking volleyball career as a Hurricane, <?xml:namespace prefix=”st1″ ns=”urn:schemas-microsoft-com:office:smarttags”?>University of Miami’s all-time blocks leader Ciara Michel is in Australia for a semester of studying abroad and continuing her volleyball career. She began attending classes at MonashUniversity in Clayton, Victoria — a suburb of Melbourne – in early February and will be there through the end of June. In the meantime, Ciara will be blogging from “Down Under”, giving UM volleyball fans an inside look into her experiences over the next four months…<?xml:namespace prefix=”o” ns=”urn:schemas-microsoft-com:office:office”?>

Hi everyone!  It’s Ki, remember me? I used to be on the team … Well now I’m on a new team called Team Australia. But don’t worry … I’m a `Cane at heart for life!  As they say, I bleed orange and green.

Well, I’ve been in Australia on exchange now for about a month now and it has been amazing. It’s such a great experience, going somewhere completely new, knowing no one, but knowing that when I leave here, I will have so many more friends for life.

So far I’ve been enjoying living in the dorms on campus (don’t laugh), and feeling like a freshman again. I’ve met so many awesome new people, but don’t worry, none that compare to you Bridget ;). My class schedule is nothing compared to what it was back in Miami, I only have class on Mondays and Tuesdays, so that should leave plenty of long weekends for traveling and seeing the everything Australia has to offer (budget permitting). Everything here is double the price it would be at home, so I’ll definitely be broke when I get back!

I’ve joined tons of clubs — because apparently that’s the thing to do here — with the most notable of them being a volleyball club. We practice Tuesdays and Thursdays from 7:30 p.m. to 9:30 p.m. There’s a little 15 minute fitness regime at the beginning, nothing compared to ‘Body by Mac’ of course, but nevertheless, I’m completely out of shape!

There was a tournament last weekend, but I skipped it to go camping in the mountains. Another club I’ve joined is the Bushwalking Club (which is basically an outdoor sport club) and this weekend 60 of us went up into the mountains, set up tents, and had a choice to pick the activities between mountain biking, rock climbing, kayaking, bushwalking and tubing. I did the first three and they were awesome!  It was such a great experience … I saw some kangaroos and a fat koala in a tree.

Two weekends ago, a few of us saw the Great Ocean Road and camped there a few days, hiking down waterfalls and surfing (or attempting to surf) Bells Beach, which is apparently famous for its waves.

It’s been a great few weeks and I miss everyone back home and hope to have tons more adventures to share with you over the next few months. I’ll keep you updated! Good luck to the men’s basketball team and all the rest of the `Canes competing this spring.

Check back with Hurricanesports.com for Ciara’s second post from Australia the week of April 13-19.