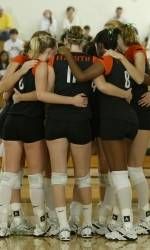 CORAL GABLES, Fla. – University of Miami head volleyball coach Nicole Lantagne Welch has announced the signing of Ali Becker (Katy, Texas) and Lane Carico (Manhattan Beach, Calif.) to National Letters of Intent to attend and play volleyball at Miami in the fall of 2008.

“We are very excited about our 2008 class,” Lantagne Welch said. “These two players are a great follow up our nationally-ranked 2007 class. They are winners on the court and they fit naturally with our team, the program and the university off the court.”

Becker, a 6-1 middle blocker, was named Cinco Ranch High School’s best offensive player as a junior in 2006 in addition to being named first team all-district and academic all-district. Her senior season, she was named District 18-5A MVP and to the Spring Branch All-Tournament team in 2007.

“Ali is a talented middle blocker that combines the speed, athleticism and jumping ability needed to make her a force in the ACC,” Lantagne Welch said. “The first thing I ever noticed about her was her blocking – her ability to successfully close blocks and get over and in the way of her opponents. But the fact that she can also put the ball away attacking a variety of sets just increases her value.”

Becker led her club team, the Texas Tornados, to a runner-up finish at the Big South National Qualifiers in 2007 in addition to leading Cinco Ranch to an undefeated season in district play her senior year.

“She is natural attacking off one foot behind the setter which will allow us flexibility in our offense,” Lantagne Welch added. “Ali’s versatility will be put to use early for the `Canes and we look forward to working with a student-athlete of her caliber.”

Carico, a 5-11 outside hitter, led Mira Costa High School to a perfect 37-0 record and to the school’s fourth-straight state championship in 2007. As team captain at Mira Costa, Carico was named MVP of the Santa Barbara Tournament of Champions as well as to the Durango Classic All-Tournament Team.

“Lane is simply-put, a great volleyball player,” Lantagne Welch said. “She has the court savvy of a veteran player and that has a lot to do with the fact that she has played at such a high level for so long. She can impact the game in so many ways by being a great passer, a reliable defender, a smart attacker and a strong blocker.”

Ranked as the 66th top senior nationally by Prepvolleyball.com, Carico also represented the United States at the Under-19 FIVB Beach Volleyball World Championships in Poland. As a team captain on her club team, TCA, she was named to the 2007 Junior Olympics 17 and under Open Division All-Tournament team.

“She is one of the best natural ball handlers that we have ever had here,” Lantagne Welch added. “Lane’s volleyball IQ and decision-making on the court are a perfect compliment to her physical gifts. She will undoubtedly have an early impact on our program.”

The Hurricanes, coming off a 14-17 campaign in 2007, add Becker and Carico to a team that loses just two seniors to graduation and will head into the 2008 season with seven of their top eight offensive players and their top defensive player in Cassie Loessberg returning.

“Lane and Ali have seen a lot of success on the all the teams they have been a part of and both will bring that winning attitude and so much more to our growing program.”