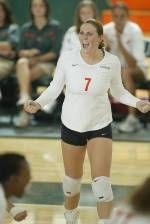 Volleyball Cruises To A 3-0 Win Over Boston College

CORAL GABLES, Fla. – Genny Mayhew and Bridget Bomhack combined for 34 kills and Maria Andersson picked up her fifth double-double of the season as Miami defeated Boston College, 3-0, Sunday afternoon at the Knight Sports Complex. Mayhew recorded a match-high 19 kills, Bomhack hit a team-best .483 in recording 15 kills, her second-highest total of the season, and Andersson finished with 10 kills and a match-high 14 digs as UM improved to 12-15 overall and 6-12 in Atlantic Coast Conference action.

“I can’t say enough about how much Genny has learned and grown as a hitter this year,” head coach Nicole Lantagne Welch said. “She is doing a phenomenal job carrying the offensive load for us.”

Mayhew hit .457 on the afternoon, committing just three errors in 35 attempts while Bomhack had only one error in 29 attempts.

Two days after becoming the first freshman in school history to record 1,000 assists in a season, setter Katie Gallagher had a productive afternoon, collecting 47 assists, two kills, two aces and three digs. As a team, UM hit .336, its second-highest mark of the season, while Boston College (12-16, 6-12) hit .317.

“We really had a great offensive night,” Lantagne Welch said. “We were clicking on all cylinders and we hit over .300, which is excellent for us. We served really tough as well, which took them out of their rhythm.”

Cassie Loessberg and Angelica Ellis each recorded three aces as UM tallied 11 aces on the afternoon to just four for BC.

Defensively for Miami, Bomhack and Loessberg each finished with nine digs to compliment Andersson’s 14 while Ciara Michel had two total blocks.

The Eagles were led by their top hitter, Kelsey Johnson, who finished with 11 kills on 24 attempts. Dani Moskitis ended the match with 33 assists and 10 digs, Audrey Eichler had three block assists and Cathy Quilico led the team with 12 digs.

Boston College started the first game on a 7-1 run but Miami rallied to tie the score at 16-16. From there, UM would win 14 of the final 19 points, including eight straight points with Ellis serving to end the game. Mayhew and Andersson combined for the 11 of the team’s 18 kills in the game for UM while Abigail Hasebroock led BC with four kills.

In the second game, the two teams battled back and forth before the Eagles broke a 16-16 tie by winning seven of the next 11 points. With BC up 23-20, Miami tied it back up at 26-26 and for the second consecutive game, Ellis’ serving finished the game with UM scoring five straight with her behind the line. Mayhew added nine more kills in the game and Bomhack chipped in with six.

The Hurricanes will now hit the road to take on Clemson Thursday, Nov. 15 at 7 p.m. in Clemson, S.C. before turning around the next day to face Georgia Tech Friday, Nov. 16 at 7 p.m. in Atlanta.