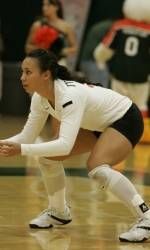 CORAL GABLES, Fla. – With just six games remaining on the 2007 schedule, the University of Miami volleyball team is looking to carry its recent momentum into the season’s final few weeks, starting with a pair of matches this weekend in Coral Gables against Maryland and Boston College. The Hurricanes will host the Terrapins Friday, Nov. 9 at 7 p.m. in the Knight Sports Complex before taking on the Eagles Sunday, Nov. 11 at 12 p.m.

“We are coming off a great team performance in which we had great offensive rhythm,” head coach Nicole Lantagne Welch said. “We want to repeat that this weekend.”

Miami (11-14, 5-11) comes into the weekend having won two of its last three, with wins over Virginia Tech and Wake Forest and loss to nationally-ranked Duke in between. The Terrapins (15-10, 7-9) have won three of their last five, with wins over Boston College, Wake Forest and N.C. State and losses to Duke and most recently, North Carolina. The Eagles (12-14, 6-10), after losing four straight in late October, have won two of their last three contests heading into the weekend. A 3-2 win at home against Wake Forest closed out Boston College’s October slate before a loss to North Carolina and a 3-1 win over N.C. State this past weekend opened November.

Sunday’s match against the Eagles will be broadcast live via ACC Select at www.ACCSelect.com and can also be heard live on the University’s student network, WVUM 90.5 FM.

“We know that when you play teams the second time around, you have a better idea of their strengths and weaknesses and we’re hoping that is to our advantage at home,” Lantagne Welch said.

The Hurricanes’ biggest strength this season continues be Genny Mayhew on the offensive attack. In Miami’s last time out, Mayhew had her best match as a Hurricane, setting a school record with 25 kills in a three-game match in Miami’s 3-0 win over ACC foe Wake Forest this past Saturday in Winston-Salem. Mayhew, who was one kill shy of her career-best mark set earlier this season at Virginia Tech, hit .632 on the night, the best single-match percentage for a UM player this season. Committing just one error on 38 attempts, Mayhew broke Valeria Tipiana’s mark of 22 kills in a three-game match set Sept. 24, 2004 against Florida State. On the season, Mayhew has recorded 342 kills for a 3.72 kills per game average.

Two of Mayhew’s teammates also enter the weekend with the opportunity to go into the UM volleyball record books for single-season accomplishments. Freshman setter Katie Gallagher needs just 10 more assists to become the fifth player in school history and the first freshman ever to record 1,000 assists in a single season. In addition to Gallagher, sophomore libero Cassie Loessberg needs just 29 more digs to surpass Jamie Grass’s UM record of 499 digs in a single season, set in 2002.

About Maryland
Beth Gillming’s 312 kills leads Maryland offensively while Jade Brown and Mary Beth Brown each have over 200 kills with 259 and 218 respectively. Katie Usher, who ranks fourth on the squad with 173 kills, is Maryland’s most-efficient hitter with a .332 attack percentage, the sixth-highest total in the league. Three Terrapins, Hayley Hanson, Tedi Doucet and Rachel Profit have all tallied at least 200 assists thus far, with Hanson’s 611 assists leading the team. The Terps have the league’s toughest defensive unit at the net, leading the ACC with a 3.42 blocks per game average. Mary Beth Brown and Jade Brown have combined for over 200 total blocks this season while Gillming and Maggie Schmelzle each have over 300 digs thus far.

About Boston College
Kelsey Johnson continues to lead the team and be among the top scorers in the ACC, averaging 4.53 kills per game, second in the league to only Duke’s Carrie DeMange’s 5.05 average. Her 412 kills this season is just 36 kills behind the school’s all-time single season kill mark of 448 set by Rachel Bach in 2002. Brittany Pierpont and Dani Moskitis have split the setting duties for BC this season, with 636 and 416 assists respectively while Cathy Quilico leads the club with 379 digs. As a team, the Eagles also boast the league’s top serving attack with an average of 2.18 aces per game.

Fans can follow both matches this weekend via GameTracker at www.hurricanesports.com. To access GameTracker, visit the team’s schedule on the Miami volleyball page. For tickets to this weekend’s matches, contact the Hurricane ticket office at 1-800-GO-CANES.