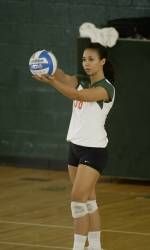 Maria Andersson led the `Canes with seven kills while Bridget Bomhack and Ciara Michel finished with six and five respectively. Cassie Loessberg had a strong night defensively in a losing effort, reaching the 20-dig mark for the 10th time this season, finishing right at 20 for UM. Katie Gallagher, who tallied 25 assists, also recorded double-digit digs with 10 in addition to her three kills and aces.

Duke’s Rachael Moss led the team with 13 kills while reigning ACC Player of the Week Carrie DeMange finished with 12 on the night. Ali Hausfeld recorded 42 assists to go along with her seven digs while Jenny Shull and Moss led the group on the defensive end with 23 and 14 digs respectively.

The difference in the match came at the net where Duke out-blocked UM, 12 total team blocks to two. Leading that cause for Duke was Norman, DeMange and Sue Carls with the trio tallying 16 block assists.

Duke took the early advantage with a 30-20 win in game one before a 30-22 win in the second game put the Blue Devils up 2-0 over UM. UM was unable to force a fourth game, falling 30-20 in the third game to give Duke its second sweep over the `Canes this season.

The Hurricanes will make the short trip west on I-40 to Winston-Salem when they visit Wake Forest Saturday night at 6 p.m. in Reynolds Gymnasium.