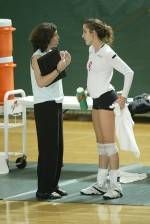 CORAL GABLES, Fla. – Coming off a big 3-2 win over Virginia Tech this past Saturday at the Knight Sports Complex, the University of Miami volleyball team heads back to the state of North Carolina this weekend to take on Duke and Wake Forest in hopes of avenging losses to both squads in Coral Gables earlier in the Atlantic Coast Conference season.

Miami will take on the Blue Devils Friday, Nov. 2 at 7 p.m. inside Cameron Indoor Stadium in Durham before making the short trip west to Winston-Salem to face the Demon Deacons Saturday, Nov. 3 at 6 p.m. in Reynolds Gymnasium.

The Hurricanes (10-13, 4-10 ACC) have gone 2-3 in their last five matches, with wins over the Hokies this past weekend and N.C. State, Oct. 19, with losses to North Carolina, Florida State and Virginia in between.

The Blue Devils (18-4, 13-1) enter the weekend having won 13 of their last 14 dating back to an early September loss to Louisville. Duke’s only loss during that period came at home against an ACC-leading Clemson squad that was un-ranked at the time but currently sits 24th in the CSTV/AVCA Coaches Poll.

“We’ve been working to improve our side-out game and that will be critical against a team like Duke,” head coach Nicole Lantagne Welch said. “We’ll also need to play a strong match defensively in order to slow down their offensive attack.”

Wake Forest (7-16, 4-10) on the other hand has struggled as of late, dropping its last seven matches and nine of its last 10 overall with its lone win coming at N.C. State, Oct. 6.

Bridget Bomhack enters the weekend on a hot streak for UM, having recorded double-digit kills in five straight matches in addition to recording a career-high 25 digs against Virginia Tech on Saturday after picking up nine the previous two matches. The freshman duo of Katie Gallagher and Maria Andersson have also played well, with Gallagher reaching the 50-assist mark three times in the last five matches and Andersson recording a career-best 16 kills to go along with 16 digs against the Hokies.

Genny Mayhew reached the 300-kill mark this season in picking up 39 in two matches over the weekend. She leads the team with 315 kills now and ranks 10th in the league with a 3.62 kills per game average. Cassie Loessberg, averaging just over five digs per game, currently has a team-best 442 this season and will likely reach the 500-dig plateau in coming weeks.

About Duke
The Blue Devils have the ACC’s last two ACC Player of the Week honorees in Carrie DeMange, two weeks ago, and Ali Hausfield, this past week. DeMange, who has earned the distinction on three different occasions this season, leads the ACC in total kills (426) and kills per game (5.13) while Hausfield, a first-time winner this year, leads the league and ranks second in the country with an average of 14.24 assists per game. Rachael Moss, Sue Carls and Jourdan Norman compliment DeMange offensively with Moss ranking fourth in the league in kills (4.09 pg) and Carls and Norman each over 200 total kills with 219 and 218 respectively. Jenny Shull leads the club defensively with a 5.42 digs per game average.

About Wake Forest
Natalie Mullikan’s 328 kills account for nearly 28 percent of the Demon Deacons’ offensive attack while Jessica Furlong and Kristen White are also factors with 212 and 187 kills respectively. Kelsey Jones sets up the Wake Forest offense with 741 assists (10.44 pg) thus far while Dylan Faulkner has chipped in with 216 of her own. Six players have tallied double-digits digs this season with Megan Thornberry’s 351 leading the group. At the net, Mullikan and Lauren McIntyre rank first and second on the club with 105 and 78 total blocks respectively.

The Hurricanes are 1-6 all-time against the Blue Devils with their lone win coming when UM defeated Duke, 3-0, in the first round of the 2002 NCAA Tournament in Madison, Wis. Against Wake Forest, Miami is 4-2 all-time having won three straight matches before the Deacons defeated the `Canes, 3-0, just over a month ago.

Fans can follow Saturday’s match at Wake Forest via GameTracker at www.hurricanesports.com. To access GameTracker, visit the team’s schedule on the Miami volleyball page.