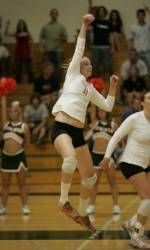 CHAPEL HILL, N.C.- After winning the first of two weekend matches Friday night at N.C. State, the Miami volleyball team was unable to pick up a second win in North Carolina as the Hurricanes fell to UNC, 3-0, Saturday night in Atlantic Coast Conference action at Carmichael Arena.

Miami (9-11, 3-8 ACC) was led on offense by Genny Mayhew who finished with a match-high 12 kills and the duo of Ciara Michel and Bridget Bomhack, who each finished with 11. With the win, North Carolina improves to 9-11 overall and 5-6 in league play.

Loessberg reached the 20-dig mark for the second time in as many nights, finishing with a match-high 20 on the night while Katie Gallagher also finished in double-digits with 10, in addition to her 38 assists on the offensive end.

“Cassie was also strong on the defensive end of the ball but we couldn’t generate enough offense throughout the match,” Lantagne Welch said. “We need to develop a killer instinct. When we get a lead, we need to learn to finish teams off.”

The trio of Megan Owens, Lauren Prussing and Ingrid Hanson-Tuntland all finished with nine kills for UNC while Stephanie Jansma directed the Tar Heel attack, assisting on 35 of the team’s 49 kills. On the defensive end, Briana Eskola lead North Carolina with 18 digs while Christie Clark finished with a match-high eight block assists.

The `Canes fell behind early with a 30-24 loss in game one and lost again in the second game, losing the final eight points after a 22-22 tie in game two to fall behind 2-0. The two teams battled back and forth in the third game to a 25-25 tie before UNC won three straight to get within two points of the win. The two teams split the next two points before UM won four straight to even it up at 30. An assisted block from Clark and Megan Owens put the Tar Heels up by one before a Miami attack error gave North Carolina the win, 32-30.

The Hurricanes will begin their second-half of the league schedule when they return home for three home matches starting with Florida State on Tuesday, Oct. 23 at 7 p.m. The match will be shown live on Sun Sports and can be followed online via GameTracker at www.hurricanesports.com.